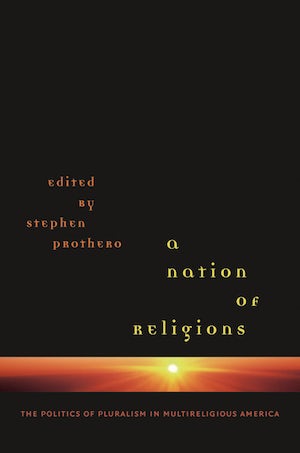 The United States has long been described as a nation of immigrants, but it is also a nation of religions in which Muslims and Methodists, Buddhists and Baptists live and work side by side. This book explores that nation of religions, focusing on how four recently arrived religious communities--Muslims, Buddhists, Hindus, and Sikhs--are shaping and, in turn, shaped by American values.

For a generation, scholars have been documenting how the landmark legislation that loosened immigration restrictions in 1965 catalyzed the development of the United States as "a nation of Buddhists, Confucianists, and Taoists, as well as Christians," as Supreme Court Justice Tom Clark put it. The contributors to this volume take U.S. religious diversity not as a proposition to be proved but as the truism it has become. Essays address not whether the United States is a Christian or a multireligious nation--clearly, it is both--but how religious diversity is changing the public values, rites, and institutions of the nation and how those values, rites, and institutions are affecting religions centuries old yet relatively new in America. This conversation makes an important contribution to the intensifying public debate about the appropriate role of religion in American politics and society.

Stephen Prothero is professor of religion at Boston University and author or editor of six books, including American Jesus: How the Son of God Became a National Icon.
For more information about Stephen Prothero, visit the Author Page.

"Enlarges the scholarly conversation about American religious pluralism and points to the importance of conducting that conversation across disciplines. . . . Extremely valuable and suggestive of additional future projects that place such comparisons at their center."--American Journal of Sociology

"A must-read volume for Americans concerned about freedom of religion in the US. Highly Recommended."--Choice

"This well-written book documents a change in the American religious landscape of which many are unaware: the presence of practitioners of Mideastern and Far Eastern religions within the American mainstream."--Multicultural Review

"Prothero is to be admired for tackling this topic."--Publisher's Weekly

"Pluralism is not simply the fact of our religious and cultural diversity, but also engagement with one another and with common public issues. This volume brings together an assembly of distinguished scholars from a range of America's religious traditions--all engaged with the American project of pluralism. It is a splendid book and a landmark achievement."--Diana L. Eck, Harvard University