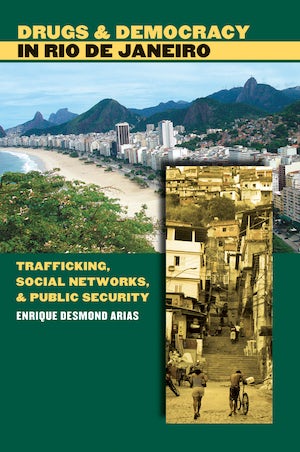 To purchase online via an independent bookstore, visit Bookshop.org
Taking an ethnographic approach to understanding urban violence, Enrique Desmond Arias examines the ongoing problems of crime and police corruption that have led to widespread misery and human rights violations in many of Latin America's new democracies. Employing participant observation and interview research in three favelas (shantytowns) in Rio de Janeiro over a nine-year period, Arias closely considers the social interactions and criminal networks that are at the heart of the challenges to democratic governance in urban Brazil.

Much of the violence is the result of highly organized, politically connected drug dealers feeding off of the global cocaine market. Rising crime prompts repressive police tactics, and corruption runs deep in state structures. The rich move to walled communities, and the poor are caught between the criminals and often corrupt officials. Arias argues that public policy change is not enough to stop the vicious cycle of crime and corruption. The challenge, he suggests, is to build new social networks committed to controlling violence locally. Arias also offers comparative insights that apply this analysis to other cities in Brazil and throughout Latin America.

"A refreshing antidote to the earnest but misleading dichotomies of much official discourse. . . . Arias adds a distinctive voice . . . in terms of his subject matter, theoretical perspective, and methods."--Journal of Latin American Studies

"A path-breaking book that will change the way we understand Rio de Janeiro and other cities plagued by the territorial control of violent criminal networks."--The Americas

"Arias is to be applauded for his courageous and sustained research in very difficult locations, and for his evident humanity and concern for the residents of the favelas."--British Journal of Criminology

“This book is a major contribution to the scholarly discussion on urban violence in Latin America.”--Latin Americanist

“Accessibly written and tightly argued, this book should reorient social science and policy debates on its topic, and will find wide adoption across a range of courses.”--CHOICE

"A remarkably-researched political ethnography of social violence in the hyper-violent drug-infested world of Brazilian favelas. . . . Intrepid and sophisticated."--Qualitative Sociology