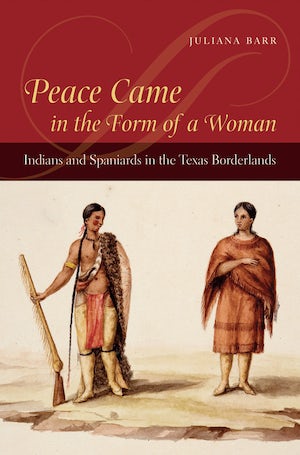 Revising the standard narrative of European-Indian relations in America, Juliana Barr reconstructs a world in which Indians were the dominant power and Europeans were the ones forced to accommodate, resist, and persevere. She demonstrates that between the 1690s and 1780s, Indian peoples including Caddos, Apaches, Payayas, Karankawas, Wichitas, and Comanches formed relationships with Spaniards in Texas that refuted European claims of imperial control.

Barr argues that Indians not only retained control over their territories but also imposed control over Spaniards. Instead of being defined in racial terms, as was often the case with European constructions of power, diplomatic relations between the Indians and Spaniards in the region were dictated by Indian expressions of power, grounded in gendered terms of kinship. By examining six realms of encounter--first contact, settlement and intermarriage, mission life, warfare, diplomacy, and captivity--Barr shows that native categories of gender provided the political structure of Indian-Spanish relations by defining people's identity, status, and obligations vis-à-vis others. Because native systems of kin-based social and political order predominated, argues Barr, Indian concepts of gender cut across European perceptions of racial difference.

Juliana Barr is Research Foundation Professor of History at the University of Florida.
For more information about Juliana Barr, visit the Author Page.

"Transforming enemies into allies took decades, and Barr offers a way to begin revising and rethinking the literature on these . . . encounters."--The Journal of American History

"A highly valuable contribution to the indigenous historiography of the southwestern borderlands in the early period of European contact."--Journal of Southern History

"Engaging and beautifully written. . . . Provides vivid accounts of Indian power and the gendered ways it was expressed."--Western Historical Quarterly

"Historiographically significant and beautifully written, Peace Came in the Form of a Woman will enjoy a wide readership among those interested in early American, Native American, and Borderlands history."--Journal of American Ethnic History

"A field-changing work. . . . The first to show how really essential gender is to contact studies."--William and Mary Quarterly

"Rich, complex, and detailed. . . . A well-crafted and thoughtful work that does much to alter the landscape of American history."--Signs