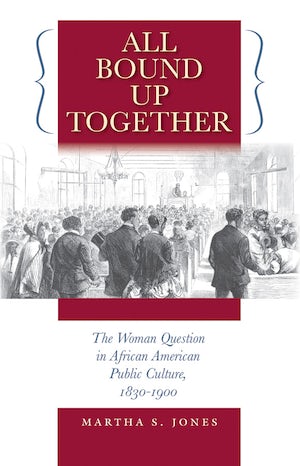 The place of women's rights in African American public culture has been an enduring question, one that has long engaged activists, commentators, and scholars. All Bound Up Together explores the roles black women played in their communities' social movements and the consequences of elevating women into positions of visibility and leadership. Martha Jones reveals how, through the nineteenth century, the "woman question" was at the core of movements against slavery and for civil rights.

Unlike white women activists, who often created their own institutions separate from men, black women, Jones explains, often organized within already existing institutions--churches, political organizations, mutual aid societies, and schools. Covering three generations of black women activists, Jones demonstrates that their approach was not unanimous or monolithic but changed over time and took a variety of forms, from a woman's right to control her body to her right to vote. Through a far-ranging look at politics, church, and social life, Jones demonstrates how women have helped shape the course of black public culture.

Martha S. Jones is associate professor of history and Afroamerican and African studies and visiting professor of law at the University of Michigan.

"Convincingly illustrates the degree to which the women question influenced all aspects of northern black culture from the 1830s onward. . . . Well-written and thoroughly researched."--Journal of Social History

"Jones distinguishes African American women's voices, spaces, and places, focusing on the unique aspects of their multidimensional existence. . . . Provides detailed accounts. . . . Documents how these women shaped and defined the nature of American public culture in the 19th century."--Journal of African American History

"An important contribution to the growing literature on black women’s political activism . . . in the nineteenth century."--Signs

"Ever mindful of the history of the experiences of white women, Jones proves that black women's experiences stood separate, and she fruitfully explores the overlaps and digressions. At the same time, she plants the story firmly within the African American experience and its chronology. All Bound Up Together gives us a new and insightful understanding of women's rights and calls into question many of the foundational concepts of women's history."--Glenda Gilmore, Yale University