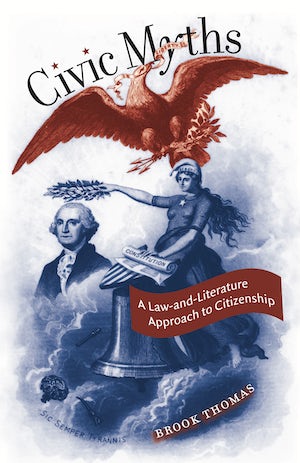 As questions of citizenship generate new debates for this generation of Americans, Brook Thomas argues for revitalizing the role of literature in civic education. Thomas defines civic myths as compelling stories about national origin, membership, and values that are generated by conflicts within the concept of citizenship itself. Selected works of literature, he claims, work on these myths by challenging their terms at the same time that they work with them by relying on the power of narrative to produce compelling new stories.

Civic Myths consists of four case studies: Nathaniel Hawthorne's The Scarlet Letter and "the good citizen"; Edward Everett Hale's "The Man without a Country" and "the patriotic citizen"; Mark Twain's Adventures of Huckleberry Finn and "the independent citizen"; and Maxine Hong Kingston's China Men and "the immigrant citizen." Thomas also provides analysis of the civic mythology surrounding Abraham Lincoln and the case of Ex parte Milligan. Engaging current debates about civil society, civil liberties, civil rights, and immigration, Thomas draws on the complexities of law and literature to probe the complexities of U.S. citizenship.

Brook Thomas, Chancellor's Professor of English at the University of California, Irvine, has written five books, including American Literary Realism and the Failed Promise of Contract.
For more information about Brook Thomas, visit the Author Page.

"Embraces the possibility of the literary artist as civic referee. . . . Illuminates and complicates the various ideals of citizenship. . . [by guiding] readers through the complex legal and historical terrain in which those ideals have been revealed. . . . A demanding and productive model of scholarship, as well as an insistent call for applying that scholarship to civic practice."--West Virginia History

"Civic Myths provides an innovative contribution to the history of American citizenship that lies at the intersection of cultural criticism and legal studies. By deftly revealing how the social and conceptual contradictions implicated in competing visions of citizenship find their symbolic resolution in literary narrative, Thomas creates a powerful interpretive framework which should appeal to scholars and students in a variety of academic fields."--Mark S. Weiner, Rutgers School of Law, Newark

"From one of the most respected Americanists in the field, what is dramatized here is nothing less than the contradictions lurking in the utopian dream of a 'government of the people, by the people, and for the people.' Analyzing these contradictions, Civic Myths speaks directly to our current legal and political climate. Thomas's forceful argument is both historically salient and utterly timely."--Wai Chee Dimock, Yale University