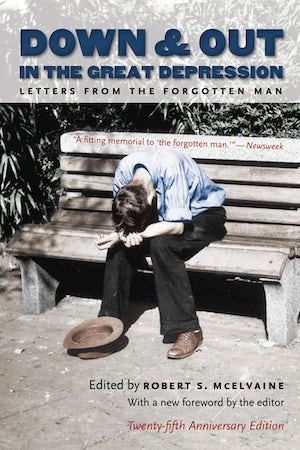 Down and Out in the Great Depression is a moving, revealing collection of letters by the forgotten men, women, and children who suffered through one of the greatest periods of hardship in American history. Sifting through some 15,000 letters from government and private sources, Robert McElvaine has culled nearly 200 communications that best show the problems, thoughts, and emotions of ordinary people during this time.

Unlike views of Depression life "from the bottom up" that rely on recollections recorded several decades later, this book captures the daily anguish of people during the thirties. It puts the reader in direct contact with Depression victims, evoking a feeling of what it was like to live through this disaster.

Following Franklin D. Roosevelt's inauguration, both the number of letters received by the White House and the percentage of them coming from the poor were unprecedented. The average number of daily communications jumped to between 5,000 and 8,000, a trend that continued throughout the Rosevelt administration. The White House staff for answering such letters--most of which were directed to FDR, Eleanor Roosevelt, or Harry Hopkins--quickly grew from one person to fifty.

Mainly because of his radio talks, many felt they knew the president personally and could confide in him. They viewed the Roosevelts as parent figures, offering solace, help, and protection. Roosevelt himself valued the letters, perceiving them as a way to gauge public sentiment. The writers came from a number of different groups--middle-class people, blacks, rural residents, the elderly, and children. Their letters display emotional reactions to the Depression--despair, cynicism, and anger--and attitudes toward relief.

In his extensive introduction, McElvaine sets the stage for the letters, discussing their significance and some of the themes that emerge from them. By preserving their original spelling, syntax, grammar, and capitalization, he conveys their full flavor.

The Depression was far more than an economic collapse. It was the major personal event in the lives of tens of millions of Americans. McElvaine shows that, contrary to popular belief, many sufferers were not passive victims of history. Rather, he says, they were "also actors and, to an extent, playwrights, producers, and directors as well," taking an active role in trying to deal with their plight and solve their problems.

For this twenty-fifth anniversary edition, McElvaine provides a new foreword recounting the history of the book, its impact on the historiography of the Depression, and its continued importance today.

"There's nothing more deeply moving than reading the words and thus hearing the voices of the actual survivors of hard times. McElvaine has captured these voices as no one else ever has."--Studs Terkel

"An illuminating contribution to the history of a bad time half a century ago."--Arthur Schlesinger, Jr., New York Times Book Review

"Soundly conceived and imaginatively edited, Down and Out in the Great Depression shows how Americans responded to economic collapse, not in memory, but in their own words at the time-a compelling contribution to our history."--Arthur Schlesinger, Jr.

"McElvaine . . . has produced [a] compelling, often poignant glimpse of America's mood during the Great Depression. . . . It makes a fitting memorial to 'the forgotten man.'"--Newsweek