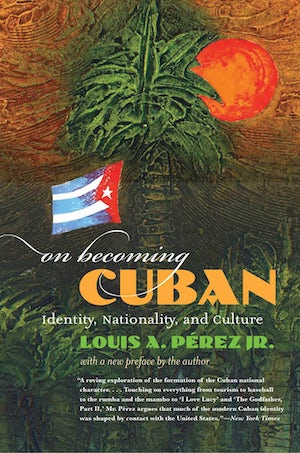 With this masterful work, Louis A. Pérez Jr. transforms the way we view Cuba and its relationship with the United States. On Becoming Cuban is a sweeping cultural history of the sustained encounter between the peoples of the two countries and of the ways that this encounter helped shape Cubans' identity, nationality, and sense of modernity from the early 1850s until the revolution of 1959.

Using an enormous range of Cuban and U.S. sources--from archival records and oral interviews to popular magazines, novels, and motion pictures--Pérez reveals a powerful web of everyday, bilateral connections between the United States and Cuba and shows how U.S. cultural forms had a critical influence on the development of Cubans' sense of themselves as a people and as a nation. He also articulates the cultural context for the revolution that erupted in Cuba in 1959. In the middle of the twentieth century, Pérez argues, when economic hard times and political crises combined to make Cubans painfully aware that their American-influenced expectations of prosperity and modernity would not be realized, the stage was set for revolution.

Louis A. Pérez Jr. is J. Carlyle Sitterson Professor of History at the University of North Carolina at Chapel Hill. His books include To Die in Cuba: Suicide and Society and The War of 1898: The United States and Cuba in History and Historiography (both from the University of North Carolina Press).
For more information about Louis A. Pérez Jr., visit the Author Page.

"Pérez is one of the pioneers who tenaciously continued to work on Cuba despite the obstacles posed by both Washington and Havana. On Becoming Cuban is a roving exploration of the formation of the Cuban national character from the early 1800's to 1961. Touching on everything from tourism to baseball to the rumba and the mambo to 'I Love Lucy' and 'The Godfather, Part II,' Mr. Pérez argues that much of the modern Cuban identity was shaped by contact with the United States."--New York Times

"This book is about a love affair gone bad, about the intimate and complex entanglements between two peoples thrown together by geography and history. . . . [Pérez] reveals how the United States and Cuba have--in ways neither has ever fully acknowledged--lodged themselves irrevocably in each other's imagination."--Times Literary Supplement

"In his superbly researched scholarly book, On Becoming Cuban, Louis A. Pérez Jr. writes about the obsessive connection between Cuba and the United States--two countries held together in a cultural, perhaps even spiritual, force field created by their geographic proximity."--Los Angeles Times

"In a sweeping multilayered history, Pérez explores the intertwined lives of Cubans and Americans from the late nineteenth century to the 1950s to show how deeply each nation influenced the other. Using an array of sources, from music to oral history to popular magazines and movies, he provides a convincing and kaleidoscopic interpretation filled with colorful personalities. He concludes with a brilliant discussion of the cultural context for Castro’s uprising."--Foreign Affairs

"Revelatory and engrossing, Pérez’s epic of U.S.-Cuban relations and their impact on the development of the Cuban character focuses not on international diplomacy or saber rattling, but on symbiotic personal contact. . . . Refreshingly, Pérez does not take sides. The clarity of his writing and his extensive research make this an important addition to Latin American Studies."--Publishers Weekly