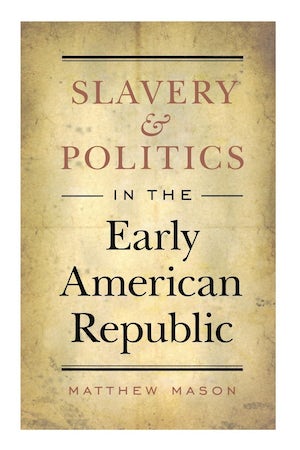 To purchase online via an independent bookstore, visit Bookshop.org
Giving close consideration to previously neglected debates, Matthew Mason challenges the common contention that slavery held little political significance in America until the Missouri Crisis of 1819. Mason demonstrates that slavery and politics were enmeshed in the creation of the nation, and in fact there was never a time between the Revolution and the Civil War in which slavery went uncontested.

The American Revolution set in motion the split between slave states and free states, but Mason explains that the divide took on greater importance in the early nineteenth century. He examines the partisan and geopolitical uses of slavery, the conflicts between free states and their slaveholding neighbors, and the political impact of African Americans across the country.

Matthew Mason is assistant professor of history at Brigham Young University. He is coeditor of The History of the Life and Adventures of Mr. Anderson, by Edward Kimber.
For more information about Matthew Mason, visit the Author Page.

"Slavery and Politics in the Early American Republic is based on extensive research, broad in scope, clearly organized, and well written. Mason has made a significant contribution to the history of the Early Republic and of American slavery."--Georgia Historical Quarterly

"This well-crafted monograph . . . revises our understanding of the early national debates over slavery. . . . Scholars of slavery and early national politics will want to read Mason's work."--Journal of Southern History

"After reading this interesting book, few historians can deny that slavery was an important, indeed integral, component of the politics of the early American republic."--Civil War History

"[A] careful and complex depiction of the variety of ways in which slavery entered the politics of the period. . . . A major contribution to our understanding of the significant role the institution of slavery had in the politics of the early republic."--Journal of the Early Republic

"Scholars and general readers alike will profit from this book. . . . Recommended."--CHOICE