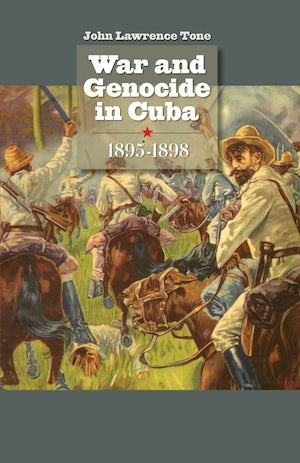 From 1895 to 1898, Cuban insurgents fought to free their homeland from Spanish rule. Though often overshadowed by the "Splendid Little War" of the Americans in 1898, according to John Tone, the longer Spanish-Cuban conflict was in fact more remarkable, foreshadowing the wars of decolonization in the twentieth century.

Employing newly released evidence--including hospital records, intercepted Cuban letters, battle diaries from both sides, and Spanish administrative records--Tone offers new answers to old questions concerning the war. He examines the origin of Spain's genocidal policy of "reconcentration"; the causes of Spain's military difficulties; the condition, effectiveness, and popularity of the Cuban insurgency; the necessity of American intervention; and Spain's supposed foreknowledge of defeat.

The Spanish-Cuban-American war proved pivotal in the histories of all three countries involved. Tone's fresh analysis will provoke new discussions and debates among historians and human rights scholars as they reexamine the war in which the concentration camp was invented, Cuba was born, Spain lost its empire, and America gained an overseas empire.

John Tone is professor of history at the Georgia Institute of Technology. He is author of the award-winning The Fatal Knot: The Guerrilla War in Navarre and the Defeat of Napoleon in Spain (from The University of North Carolina Press).
For more information about John Lawrence Tone, visit the Author Page.

"An engagingly written book that offers new insights into the war. . . .This thought provoking book should be on many bookshelves."--The Past in Review

"Tone's cogent and elegantly written book does not turn patriotic history on its head, but it does dismember the subject. . . . John Tone portrays Cuba as Spain's Vietnam, and his skill at narrating the frightening realities of these 'unconventional' guerilla wars makes it hard to avoid reflecting on tragic events in the world today."--Times Literary Supplement

"A nuanced perspective. . . . Tone writes well and his work will be accessible to experts and undergraduates alike. . . . A valuable addition to both Cuban and Spanish history and its publication is yet another indication of the high quality of scholarship that has emerged in recent years."--American Historical Review

"This pathbreaking military history sheds new light on Spanish America's last colonial war and the multitudes that died on its 'ever faithful isle.' . . . Entwines vivid retellings of military engagements with nuanced analyses of the varying motives and strategies of the war's leaders. . . . An engaging study with broad appeal for Cuban, Spanish, and U.S. historians."--HAHR

"Adds enormously to our understanding of the political, social and military dimensions of this war and is essential reading for anyone interested in the island's history, the early story of U.S. imperialism in the Caribbean, or Latin American military history."--Caribbean Studies

"Masterful account . . . fascinating and captivating. . . . A must read . . . for anyone who is concerned with current global conflicts and the human rights of noncombatants. . . . Tone does an excellent job of presenting the viewpoint of both the Cubans and the Spanish fairly."--H-Net