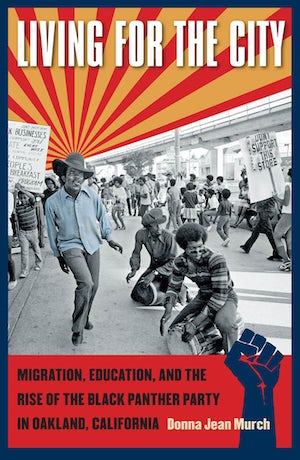 In this nuanced and groundbreaking history, Donna Murch argues that the Black Panther Party (BPP) started with a study group. Drawing on oral history and untapped archival sources, she explains how a relatively small city with a recent history of African American settlement produced such compelling and influential forms of Black Power politics.

During an era of expansion and political struggle in California's system of public higher education, black southern migrants formed the BPP. In the early 1960s, attending Merritt College and other public universities radicalized Huey Newton, Bobby Seale, and many of the young people who joined the Panthers' rank and file. In the face of social crisis and police violence, the most disfranchised sectors of the East Bay's African American community--young, poor, and migrant--challenged the legitimacy of state authorities and of an older generation of black leadership. By excavating this hidden history, Living for the City broadens the scholarship of the Black Power movement by documenting the contributions of black students and youth who created new forms of organization, grassroots mobilization, and political literacy.

Donna Murch is assistant professor of history at Rutgers, the State University of New Jersey.
For more information about Donna Jean Murch, visit the Author Page.

"A provocative reinterpretation of the origins of the Black Panther Party in Oakland....Highly recommended. Upper-division undergraduates and above."--Choice

“Well-researched, smoothly written. . . . A testament to the liberating impact of higher education. . . . It is quite doubtful if any [study] will surpass this one in terms of imagination, clear writing, deft scholarship and weighty conclusions.”--Gerald Horne, Journal of American Studies

“Creates an important framework of analysis of local black radical politics by placing higher education and southern black migrants as central to its development.”--Pacific Historical Review

“Offers a fresh perspective on East Bay black activism. . . . An engaging work that adds to the expanding literature on the interplay between black migration and political mobilization.”--Journal of African American History

"Donna Murch has crafted a remarkable study of the Emmett Till generation, the young African American men and women whose coming of age was radicalized by a decade of violence--from Till’s murder to the assassination of Malcolm X--but leavened by an optimism born of faith in migration, education, and self-invention. From debutante balls in the 1950s to Panther breakfast programs in the 1970s, it was southerners, Murch artfully shows, who transformed Oakland, California, in the civil rights and black power eras."--Robert Self, Brown University

"This is a brilliant study of the Black Power movement and a major contribution to American social, cultural, and intellectual history, particularly the study of the African American experience. Donna Murch has impressive insights into the political culture of the Black Panther Party, and this book will have a dramatic impact on the way the history of Black Power politics is written."--Komozi Woodard, Sarah Lawrence College