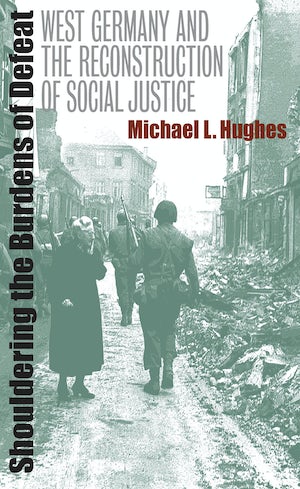 World War II and its aftermath brought devastating material losses to millions of West Germans. Military action destroyed homes, businesses, and personal possessions; East European governments expelled 15 million ethnic Germans from their ancestral homes; and currency reform virtually wiped out many Germans' hard-earned savings. These "war damaged" individuals, well over one-third of the West German population, vehemently demanded compensation at the expense of those who had not suffered losses, to be financed through capital levies on surviving private property.

Michael Hughes offers the first comprehensive study of West Germany's efforts to redistribute the costs of war and defeat among its citizenry. The debate over a Lastenausgleich (a balancing out of burdens) generated thousands of documents in which West Germans articulated deeply held beliefs about social justice, economic rationality, and political legitimacy. Hughes uses these sources to trace important changes in German society since 1918, illuminating the process by which West Germans, who had rejected liberal democracy in favor of Nazi dictatorship in the 1930s, came to accept the social-market economy and parliamentary democracy of the 1950s.

Michael L. Hughes is professor of history at Wake Forest University and author of Paying for the German Inflation.
For more information about Michael L. Hughes, visit the Author Page.

"Hughes describes the competing Lastenausgleich movements and their leaders well and at great length. . . . There is enough detail of the various options and turns in the history of the Lastenausgleich to satisfy any student of policy and law making."--American Historical Review

"Hughes employs a wide range of sources, including contemporary public opinion surveys, private papers from many politicians and financiers and lobbying and parliamentary party collections."--Canadian Journal of History

"An informative and impressive book--carefully structured, clearly written, sensitive to the mentalities and interests of its protagonists, and grounded in a fine command of extensive source material. It makes a significant and original contribution to the literature on the early history of the German Federal Republic and on the process by which that regime won widespread popular support during the 1950s."--Peter Hayes, Northwestern University

"An interesting and thoughtful account of how West Germany dealt with the financial consequences of the past that raises important questions about the contrasts of Bonn with the Weimar Republic."--Harold James, Princeton University