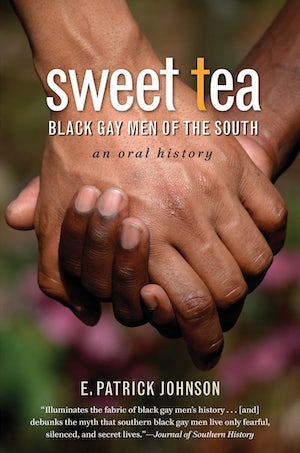 Giving voice to a population too rarely acknowledged, Sweet Tea collects more than sixty life stories from black gay men who were born, raised, and continue to live in the South. E. Patrick Johnson challenges stereotypes of the South as "backward" or "repressive" and offers a window into the ways black gay men negotiate their identities, build community, maintain friendship networks, and find sexual and life partners--often in spaces and activities that appear to be antigay. Ultimately, Sweet Tea validates the lives of these black gay men and reinforces the role of storytelling in both African American and southern cultures.

E. Patrick Johnson is Carlos Montezuma Professor of Performance Studies and African American Studies at Northwestern University. He was inducted into the Chicago Gay and Lesbian Hall of Fame in 2010.
For more information about E. Patrick Johnson, visit the Author Page.

"It's pretty rare to pick up a book, turn randomly to any page, and find such a powerful personal story that you have to close the book for a moment to take it in. But the oral histories featured in Sweet Tea . . . cast just that kind of spell."--The Advocate

"Easily shatters many narrow perceptions around the intersections of class, sex, love, age, religion, family and gender expression in Southern communities, as well as the simple and complex reasons that the men profiled have chosen to remain in the south."--ColorLines

"In reading each colorful story, it seems as if the men are sitting right in front of you. . . . With nearly 46 percent of America's new HIV/AIDS cases occurring in the South, Johnson is serving the tea right on time."--POZ

"This fascinating . . . oral history subverts countless preconceptions in its illustration of black gay subcultures thriving in just about every imaginable rural and religious milieu in the South. . . . The courage and honesty of Johnson's interviewees humble, and readers will find much to treasure in the stories."--Publishers Weekly

"Sweet Tea is an amazing book. Engaging from the very start, it is well written and thought provoking throughout. There were times I simply could not put it down."--E. Lynn Harris, New York Times bestselling novelist