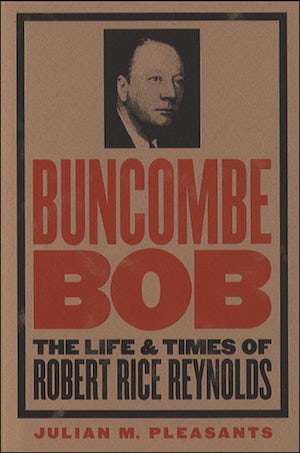 Robert Rice Reynolds (1884-1963), U.S. senator from North Carolina from 1933 to 1945, was one of the most eccentric politicians in American history. His travels, his five marriages, his public faux pas, and his flamboyant campaigns provided years of amusement for his constituents. This political biography rescues Reynolds from his cartoon-character reputation, however, by explaining his political appeal and highlighting his genuine contributions without overlooking his flaws.

Julian Pleasants argues that Reynolds must be understood in the context of Depression-era North Carolina. He capitalized on the discontent of the poverty-stricken lower class by campaigning in tattered clothes while driving a ramshackle Model T--a sharp contrast to his wealthy, chauffeur-driven opponent, incumbent senator Cam Morrison. In office, Reynolds supported Roosevelt's New Deal. Although he was not pro-Nazi, his isolationist stance and his association with virulent right-wingers enraged his constituents and ultimately led to his withdrawal from politics.

Pleasants reveals Reynolds to be a showman of the first order, a skilled practitioner of class politics, and a unique southern politician--the only one who favored the New Deal while advocating isolationist views.

Julian M. Pleasants, coauthor of Frank Porter Graham and the 1950 Senate Race in North Carolina, is professor of history and director of the Proctor Oral History Program at the University of Florida.
For more information about Julian M. Pleasants, visit the Author Page.

"[Reynolds had] a fascinating and entertaining, if not particularly edifying, career, and Pleasants recounts it in straightforward and effective fashion."--Journal of Southern History

"What Pleasants has delivered is a meticulously researched, carefully delivered and thoughtfully crafted assessment of Richard Rice Reynolds and his place in North Carolina history."--Charlotte Observer

"Pleasants masterfully chronicles this swaggering character who demagogued his way across Depression-era North Carolina with a populist brand of politics and a knowing wink."--Raleigh News & Observer

"As a biography of a second-tier politician, this volume succeeds admirably. The author's research into primary sources is extensive, his coverage of Reynolds's public career comprehensive, and his prose clear and jargon free. The account of the senator's colorful private life, including his many marriages, is also both interesting and humorous."--North Carolina Historical Review

"Buncombe Bob tackles a difficult subject and places him in the context of his times. North Carolina Senator Robert Rice Reynolds was a colorful, controversial Depression-era politician who was usually dismissed by a broad range of critics as a zany, a buffoon, and even a bigot. Although Reynolds left few personal papers, Pleasants has done extensive research in Reynolds's congressional papers and the leading newspapers of the day and produced a critical, compelling biography. As a result, Buncombe Bob complements the writings of V. O. Key and Robert Luthin and the standard histories of the Tarheel State."--Bruce Clayton, Allegheny College

"Out of the Great Depression came Senator Bob Reynolds, one of the most unusual political figures to have risen so high in North Carolina. Julian Pleasants presents a clear-headed account of Reynolds's out-of-the-ordinary life, so full of contradictions. And, in doing so, Pleasants demonstrates a deft facility for bringing out the drama of old campaigns and debates."--Ferrel Guillory, University of North Carolina at Chapel Hill