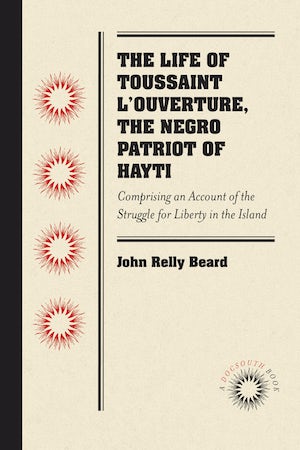 Toussaint L'Ouverture (1743-1803) won international renown in the Haitian fight for independence. He led thousands of former slaves into battle against French, Spanish, and English forces, routing the Europeans and seizing control of the entire island of Hispaniola. L'Ouverture became governor and commander-in-chief of Haiti before officially acknowledging French rule in 1801, when he submitted a newly written constitution to Napoleon Bonaparte (1769-1821) and the French legislature for ratification. In response, Bonaparte sent an army to depose L'Ouverture, who was taken prisoner in June of 1802 and shipped to France, where he died of pneumonia in April 1803. The Life of Toussaint L'Ouverture (1853) was first published in London on the fiftieth anniversary of L'Ouverture's death and remained the authoritative English-language history of L'Ouverture's life until the late twentieth century.

Throughout the text, John Relly Beard compares L'Ouverture to famously successful white generals, argues for his supremacy, and states that his ultimate failure to liberate Haiti and untimely death are the products of unfortunate circumstances--not an indictment of his character or leadership abilities.

John Relly Beard (1800-1876) was an English Unitarian minister who wrote more than thirty books in his lifetime, including The Life of Toussaint L'Ouverture (1853) and several reference volumes on a variety of topics.
For more information about John Relly Beard, visit the Author Page.