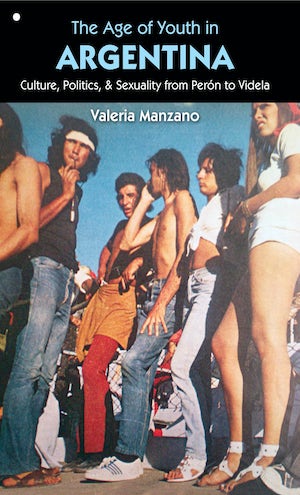 To purchase online via an independent bookstore, visit Bookshop.org
This social and cultural history of Argentina's "long sixties" argues that the nation's younger generation was at the epicenter of a public struggle over democracy, authoritarianism, and revolution from the mid-twentieth century through the ruthless military dictatorship that seized power in 1976. Valeria Manzano demonstrates how, during this period, large numbers of youths built on their history of earlier activism and pushed forward closely linked agendas of sociocultural modernization and political radicalization.

Focusing also on the views of adults who assessed, and sometimes profited from, youth culture, Manzano analyzes countercultural formations--including rock music, sexuality, student life, and communal living experiences--and situates them in an international context. She details how, while Argentines of all ages yearned for newness and change, it was young people who championed the transformation of deep-seated traditions of social, cultural, and political life. The significance of youth was not lost on the leaders of the rising junta: people aged sixteen to thirty accounted for 70 percent of the estimated 20,000 Argentines who were "disappeared" during the regime.

“Manzano’s in-depth investigation of youth culture during a period of profound change in Argentina is an outstanding contribution to the scholarship on modern Argentina and youth movements around the world. . . . Highly recommended.”--Choice

"A study that decisively introduces Argentina into debates about the Global Sixties even as it opens up new vistas onto a key period in national history."--American Historical Review

“One of the more interesting to appear recently on Argentine history. . . . Makes its own important contribution to its subject and also opens new areas of research on the history of youth elsewhere in the country.”--Hispanic American Historical Review

“An important addition to the growing historiography that studies the lives and experiences of young people and is a must read for Argentine scholars dedicated to the twentieth century.”--Journal of the History of Childhood and Youth

“A major contribution to the fields of Argentine history and Latin American studies as well as the cultural history of youth in the twentieth century. Manzano proves that young people became the most active agents for economic, social, and political change in Argentina in the sixties and seventies until the process was cut short by the brutal military dictatorship of 1976. Manzano's book sheds light on one of the most savagely repressed youth movements of the 1970s.”--Oscar Chamosa, University of Georgia

"A fascinating exploration of the role of young people in Argentina from the 1950s through the 1970s. Based on a truly impressive body of research--including interviews, memoirs, advertising, press reports of all sorts, social science treatises, popular music, and television--the book offers an innovative and illuminating account of a crucial period. It will certainly be required reading for all historians of modern Argentina."--Matthew B. Karush, George Mason University