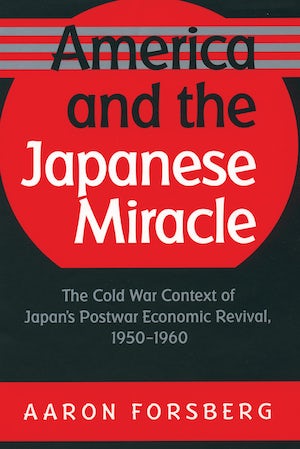 In this book, Aaron Forsberg presents an arresting account of Japan's postwar economic resurgence in a world polarized by the Cold War. His fresh interpretation highlights the many connections between Japan's economic revival and changes that occurred in the wider world during the 1950s.

Drawing on a wealth of recently released American, British, and Japanese archival records, Forsberg demonstrates that American Cold War strategy and the U.S. commitment to liberal trade played a central role in promoting Japanese economic welfare and in forging the economic relationship between Japan and the United States. The price of economic opportunity and interdependence, however, was a strong undercurrent of mutual frustration, as patterns of conflict and compromise over trade, investment, and relations with China continued to characterize the postwar U.S.-Japanese relationship.

Forsberg's emphasis on the dynamic interaction of Cold War strategy, the business environment, and Japanese development challenges "revisionist" interpretations of Japan's success. In exploring the complex origins of the U.S.-led international economy that has outlasted the Cold War, Forsberg refutes the claim that the U.S. government sacrificed American commercial interests in favor of its military partnership with Japan.

Aaron Forsberg is a Foreign Service Officer with the U.S. Department of State, dealing primarily with economic affairs. Prior to joining the Department's newly created Office of the Chief Economist in Washington, D.C. in 2013, he served in the Economic Section of the U.S. Embassy in Japan and taught history at the University of Maryland's Asian Division in Tokyo.
For more information about Aaron Forsberg, visit the Author Page.

"This book is an ambitious attempt to place postwar economic history within the wider realm of international relations. It is a pioneering study of patient administrations, angry Congressmen, and pleading Japanese bureaucrats. . . . Forsberg's account of the difficulties and successes of U.S. dealings with Japan on the economic front in the 1950s remains a substantial achievement."--American Historical Review

"Forsberg's book is a solid, well-researched work that should be studied by anyone seriously interested in the postwar relationship between Japan and the United States."--Americandiplomacy.org

"Forsberg . . . does an exceptional job . . . [and] make[s] important contributions to the history of Cold War economic diplomacy."--Journal of American History

"[This book] brings needed attention to important trends in United States-Japan relations during the 1950s. . . . It will join the short list of standard works for those seeking to understand the origins of the crucial and intense-and at times quite tense-bilateral relationship between the United States and Japan during the last fifty years."--Harvard Business History Review

"Lucid and highly readable. . . . Makes a major contribution to our knowledge. While it is primarily a study of US foreign economic policy, and the Japanese response to it, it has important lessons to tell about the interface between the political and diplomatic process, economic institutions and economic performance. Its publication should be welcomed by business historians across the board."--Business History

"An important, revealing account. Forsberg, with excellent research, carefully tells us about the seedtime that surprisingly made Japan the world's number two economic power and, especially, how those seeds were nourished: partially by the blood of the Korean conflict and notably by the U.S.-Japanese fears, and differing perceptions, of the accelerating Cold War."--Walter LaFeber, Cornell University