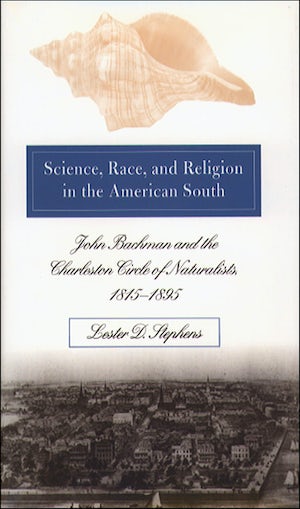 In the decades before the Civil War, Charleston, South Carolina, enjoyed recognition as the center of scientific activity in the South. By 1850, only three other cities in the United States--Philadelphia, Boston, and New York--exceeded Charleston in natural history studies, and the city boasted an excellent museum of natural history. Examining the scientific activities and contributions of John Bachman, Edmund Ravenel, John Edwards Holbrook, Lewis R. Gibbes, Francis S. Holmes, and John McCrady, Lester Stephens uncovers the important achievements of Charleston's circle of naturalists in a region that has conventionally been dismissed as largely devoid of scientific interests.

Stephens devotes particular attention to the special problems faced by the Charleston naturalists and to the ways in which their religious and racial beliefs interacted with and shaped their scientific pursuits. In the end, he shows, cultural commitments proved stronger than scientific principles. When the South seceded from the Union in 1861, the members of the Charleston circle placed regional patriotism above science and union and supported the Confederate cause. The ensuing war had a devastating impact on the Charleston naturalists--and on science in the South. The Charleston circle never fully recovered from the blow, and a century would elapse before the South took an equal role in the pursuit of mainstream scientific research.

"A rich account of how natural history was actually produced, particularly in the antebellum era. . . . This study, with its unusual blend of detailed natural history, social history, and biography, offers a valuable addition to a growing body of scholarship reassessing the role played by science in the culture of the South, as well as to the literature exploring the complex functioning of southern intellectuals in the age of slavery."--Journal of Southern History

"Stephens's work is an important addition and corrective to the history of antebellum southern intellectual thought and American science; it will likely stand as definitive on this subject for years to come."--Journal of American History

"Stephens looks at the scientific writings of six nineteenth-century naturalists whose work and lives were associated with Charleston, South Carolina. Stephens's wide-ranging research and talents as a sympathetic biographer cast welcome light on the importance of this group."--American Historical Review

"A rich account. . . . A rewarding picture of a scientific network of skilled gentlemen, which also reveals much about the aspirations of southern urban culture. . . . This book should become a standard reference for its biographical and technical details on these naturalists and their work, its discriminating reading of antebellum race theory among naturalists, and for its corrective regarding the South's place in American science."--North Carolina Historical Review

"Stephens succeeds in demonstrating the extent to which scientific inquiry in nineteenth-century Charleston was domesticated to the needs of the Old South. . . . Stephens, of course, is extraordinarily well equipped to undertake this task. . . . It is crystal clear from [this] careful exposition that science has always been about more than disclosing the facts of nature."--Books & Culture

"A well-written and noteworthy account of six South Carolinians who made notable contributions to American natural history between 1815 and 1895."--Choice