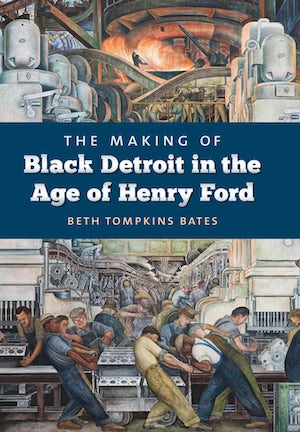 In the 1920s, Henry Ford hired thousands of African American men for his open-shop system of auto manufacturing. This move was a rejection of the notion that better jobs were for white men only. In The Making of Black Detroit in the Age of Henry Ford, Beth Tompkins Bates explains how black Detroiters, newly arrived from the South, seized the economic opportunities offered by Ford in the hope of gaining greater economic security. As these workers came to realize that Ford's anti-union "American Plan" did not allow them full access to the American Dream, their loyalty eroded, and they sought empowerment by pursuing a broad activist agenda. This, in turn, led them to play a pivotal role in the United Auto Workers' challenge to Ford's interests.

In order to fully understand this complex shift, Bates traces allegiances among Detroit's African American community as reflected in its opposition to the Ku Klux Klan, challenges to unfair housing practices, and demands for increased and effective political participation. This groundbreaking history demonstrates how by World War II Henry Ford and his company had helped kindle the civil rights movement in Detroit without intending to do so.

Beth Tompkins Bates is professor emerita at Wayne State University and author of Pullman Porters and the Rise of Protest Politics in Black America, 1925-1945.
For more information about Beth Tompkins Bates, visit the Author Page.

“Offers a more realistic view of the tensions that existed within the union . . . [and] highlights the role Black organizers played in the UAW drive at Ford."--Against the Current

"Black Detroit includes some remarkable and complicated stories [that explore] changing attitudes and realities within the city in a masterful manner. . . . It is an important addition to the Detroit Story."--American Historical Review

"A detailed and highly readable history of Ford's industrial goals, his controlling social vision for his workers, and his brutal response to unionization."--TriQuarterly

"An engaging book, lucidly presented and approachable to anyone with a curious mind."--SpeedReaders.info

"Offers a clear and compelling account of Ford's motives for courting blacks."--Speedreaders.info

Read: Bates describes how Frank Murphy became mayor in Detroit in the 1920s and how he handled the threat of the city’s bankruptcy during the Great Depression. "What Happened the Last Time Detroit Faced Bankruptcy."

Read: In a guest blog post, Bates compares the similarities between Detroit during the 1920s and today, and how Detroit’s previous struggles might inform how Detroit can rebound in the future. Read "Will a New Detroit Rise out of the Depths of Despair and Hopelessness?"

Read: In another guest blog post, Bates explores Depression-era debates between Detroit mayor Frank Murphy and Henry Ford over unemployment benefits. Read "What is Society’s Obligation to Those in Distress?"