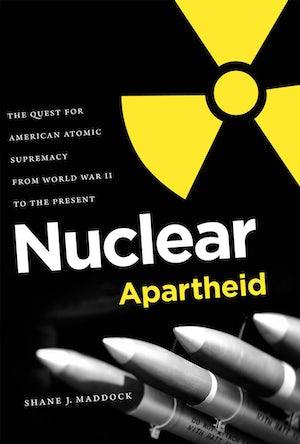 After World War II, an atomic hierarchy emerged in the noncommunist world. Washington was at the top, followed over time by its NATO allies and then Israel, with the postcolonial world completely shut out. An Indian diplomat called the system "nuclear apartheid."

Drawing on recently declassified sources from U.S. and international archives, Shane Maddock offers the first full-length study of nuclear apartheid, casting a spotlight on an ideological outlook that nurtured atomic inequality and established the United States--in its own mind--as the most legitimate nuclear power. Beginning with the discovery of fission in 1939 and ending with George W. Bush's nuclear policy and his preoccupation with the "axis of evil," Maddock uncovers the deeply ideological underpinnings of U.S. nuclear policy--an ideology based on American exceptionalism, irrational faith in the power of technology, and racial and gender stereotypes. The unintended result of the nuclear exclusion of nations such as North Korea, Pakistan, and Iran is, increasingly, rebellion.

Here is an illuminating look at how an American nuclear policy based on misguided ideological beliefs has unintentionally paved the way for an international "wild west" of nuclear development, dramatically undercutting the goal of nuclear containment and diminishing U.S. influence in the world.

Shane J. Maddock is professor of history at Stonehill College. He is coauthor of American Foreign Relations: A History and editor of The Nuclear Age.
For more information about Shane J. Maddock, visit the Author Page.

“A compelling narrative. . . . Maddock’s writing is generally lively, and he employs his subjects’ own candid words to good and occasionally humorous effect.”--Journal of Military History

"A book that deserves a high place in the literature on the history of the nuclear arms race. . . . Highly recommended."--Choice

"A detailed and thoughtful study."--Diplomacy & Statecraft

"Intriguing. . . . A powerful and comprehensive book that examines nuclear policy in abundant detail. [Maddock] sustains a compelling argument from beginning to end."--Left History

"A stirring and important book, diligently within the best traditions of diplomatic history. . . . Maddock has a clear mastery of his sources, both primary and secondary."--Andrew Johnston, Carleton University, H-Diplo Roundtable

Read: In this guest blog post, Maddock makes the case for why current U.S. policy on nuclear weapons causes an increase in global nuclear proliferation of instead of decreasing nuclear development across the globe. Read "The Case for Nuclear Zero."

Read: In a guest blog post, Maddock relates the troubled history of U.S.-Iranian relations and the U.S. foreign policy steps that contributed to Iran’s pursuit of a nuclear program. Read "Obama’s Course Correction on Iran"

Read: In another guest blog post, Maddock discusses president Obama's nuclear policies in 2010 and how they were an improvement but did not reach far enough to affect real change. Read "Obama’s Nuclear Initiatives: Neither 'Sufficient' Nor 'Bold'."

Read: In Maddock's first guest post for UNC Press Blog, he discusses North Korea’s nuclearization, what lessons Iran may take from North Korea’s experience, and what the United States can do if we are serious about eliminating nuclear threats. Read "The Delicate Art of Nuclear Jujutsu."