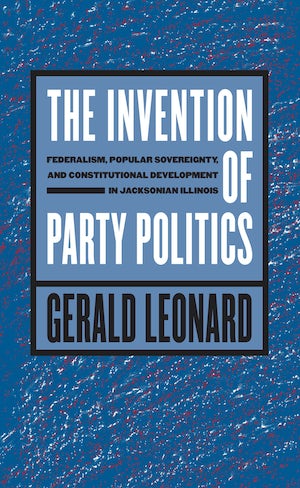 To purchase online via an independent bookstore, visit Bookshop.org
This ambitious work uncovers the constitutional foundations of that most essential institution of modern democracy, the political party. Taking on Richard Hofstadter's classic The Idea of a Party System, it rejects the standard view that Martin Van Buren and other Jacksonian politicians had the idea of a modern party system in mind when they built the original Democratic party.

Grounded in an original retelling of Illinois politics of the 1820s and 1830s, the book also includes chapters that connect the state-level narrative to national history, from the birth of the Constitution to the Dred Scott case. In this reinterpretation, Jacksonian party-builders no longer anticipate twentieth-century political assumptions but draw on eighteenth-century constitutional theory to justify a party division between "the democracy" and "the aristocracy." Illinois is no longer a frontier latecomer to democratic party organization but a laboratory in which politicians use Van Buren's version of the Constitution, states' rights, and popular sovereignty to reeducate a people who had traditionally opposed party organization. The modern two-party system is no longer firmly in place by 1840. Instead, the system remains captive to the constitutional commitments on which the Democrats and Whigs founded themselves, even as the specter of sectional crisis haunts the parties' constitutional visions.

Gerald Leonard is associate professor at the Boston University School of Law.
For more information about Gerald Leonard, visit the Author Page.

"Brilliantly reasoned and persuasively argued. It presents a strong challenge both to ethnocultural and socioeconomic accounts of party origins and to the party-system model of political history itself."--American Historical Review

"An important and innovative departure from the established historiography and . . . a major contribution to our understanding of the formation of America's party system. . . . The Invention of Party Politics stands as a lucid and provocative study of the emergence of modern party politics in the United States. Its impact upon the historiography of Jacksonian politics will be a profound and long lasting one."--Law and History Review

"Reinterpreting the rise of political parties and pro-party thought in America, Leonard challenges the familiar line of argument that the Jacksonian era saw the development of a coherent theory and practice of two-party mass democracy. His book will have a major impact among historians of Jacksonian political, constitutional, and legal history."--Sean Wilentz, Princeton University