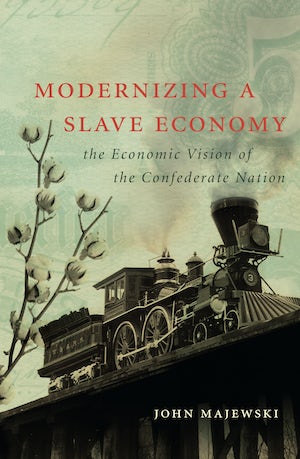 What would separate Union and Confederate countries look like if the South had won the Civil War? In fact, this was something that southern secessionists actively debated. Imagining themselves as nation builders, they understood the importance of a plan for the economic structure of the Confederacy.

The traditional view assumes that Confederate slave-based agrarianism went hand in hand with a natural hostility toward industry and commerce. Turning conventional wisdom on its head, John Majewski's analysis finds that secessionists strongly believed in industrial development and state-led modernization. They blamed the South's lack of development on Union policies of discriminatory taxes on southern commerce and unfair subsidies for northern industry.

Majewski argues that Confederates' opposition to a strong central government was politically tied to their struggle against northern legislative dominance. Once the Confederacy was formed, those who had advocated states' rights in the national legislature in order to defend against northern political dominance quickly came to support centralized power and a strong executive for war making and nation building.

John Majewski is professor of history at the University of California, Santa Barbara. He is author of A House Dividing: Economic Development in Pennsylvania and Virginia before the Civil War.


For more information about John Majewski, visit the Author Page.

"A stimulating and original analysis."--Enterprise & Society

"A tightly knit, well-written and cogently argued narrative. . . . Offers an outstanding example of how modern political economy can be interdisciplinary, empirically rigorous, and accessible."--H-Net Reviews

"[A] bracing, sophisticated, and persuasive revisionist account. . . . Will be read with enormous profit by scholars of the Civil War and the Old South."--American Historical Review

"Majewski makes a compelling case that secession and the creation of the Confederacy gave Southerners an opportunity to initiate statist policies that had been germinating well before the war. . . . Brings a fresh approach, particularly in his statistical analysis of agricultural data, to several nagging historical questions."--The Journal of American History

"The key to this book's value is its portrayal of secessionists not as a group of free-trade, states' rights libertarians, but rather as leaders who often had conditional views about free trade and states' rights."--The Independent Review