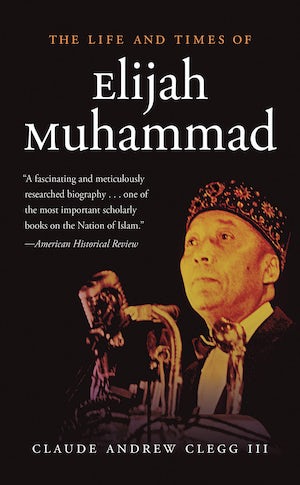 Elijah Muhammad (1897-1975) was one of the most significant and controversial black leaders of the twentieth century. His followers called him the Messenger of Allah, while his critics labeled him a teacher of hate. Southern by birth, Muhammad moved north, eventually serving as the influential head of the Nation of Islam for over forty years. Claude Clegg III not only chronicles Muhammad’s life, but also examines the history of American black nationalists and the relationship between Islam and the African American experience.

In this authoritative biography, which also covers half a century of the evolution of the Nation of Islam, Clegg charts Muhammad's early life, his brush with Jim Crow in the South, his rise to leadership of the Nation of Islam, and his tumultuous relationship with Malcolm X. Clegg is the first biographer to weave together speeches and published works by Muhammad, as well as delving into declassified government documents, insider accounts, audio and video records, and interviews, producing the definitive account of an extraordinary man and his legacy.

Claude Clegg III teaches history at Indiana University at Bloomington. He is the author of The Price of Liberty: African Americans and the Making of Liberia.
For more information about Claude Andrew Clegg III, visit the Author Page.

"I can think of no twentieth-century leader with anything like the impact of Elijah Muhammad whose life has been so profoundly unexamined. '[Clegg] has brought Muhammad to light in a fluidly written biography rich with information, analysis and suspense."--The New York Times Book Review

"Anyone seeking to understand the enduring significance of the Nation of Islam, or the rising political stock of Louis Farrakhan, should begin by reading this biography."--The Washington Post Book World

"An impressively perceptive and valuable book ... A major contribution to African-American history that ought to be read by anyone interested in Malcolm X."--David J. Garrow, in Newsday

"A fascinating and meticulously researched biography. Clegg's balanced historical narrative removes the study of Muslim individuals and groups from the realm of exotica and stereotype and joins the works of Lincoln and Essien-Udom as one of the most important scholarly books on the Nation of Islam. I highly recommend it."--American Historical Review

"Fills a significant void in the historical literature by examining the life of one of the twentieth century's most enigmatic African American leaders. This is an important work that may arouse some controversy but nonetheless contains a message of hope and redemption that has timeless resonance."--Journal of Southern History

"Clegg gives us more information than we've ever had before and new ways to think about the man whose organization bequeathed us Malcolm X and Louis Farrakhan."--Los Angeles Times Book Review