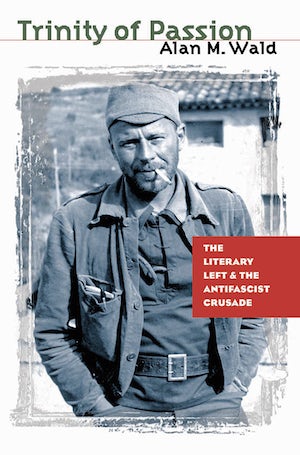 The second of three volumes by Alan Wald that track the political and personal lives of several generations of U.S. left-wing writers, Trinity of Passion carries forward the chronicle launched in Exiles from a Future Time: The Forging of the Mid-Twentieth-Century Literary Left. In this volume Wald delves into literary, emotional, and ideological trajectories of radical cultural workers in the era when the International Brigades fought in the Spanish Civil War (1936-39) and the United States battled in World War II (1941-45). Probing in rich and haunting detail the controversial impact of the Popular Front on literary culture, he explores the ethical and aesthetic challenges that pro-Communist writers faced.

Confronting heartfelt questions about Jewish masculinity, racism at the core of liberal democracy, the corrosion of utopian dreams, and the thorny interaction between antifascism and Communism, Wald re-creates the intellectual and cultural landscape of a remarkable era.

Alan M. Wald is the H. Chandler Davis Collegiate Professor of English Literature and American Culture at the University of Michigan and is the recipient of the Mary C. Turpie Prize of the American Studies Association. His six previous books include The New York Intellectuals: The Rise and Decline of the Anti-Stalinist Left from the 1930s to the 1980s and Exiles from a Future Time: The Forging of the Mid-Twentieth-Century Literary Left.
For more information about Alan M. Wald, visit the Author Page.

"A valuable addition to scholarship on the history of left-wing Jews. . . . Informative [and] richly detailed."--American Jewish History

“Wald's enterprise is distinguished by his sympathy for his writers' existential struggle and his expansive notion of [literature]. . . . One could use his work to assemble a respectable mid-twentieth-century canon of pop Modernist and social realist left literature. . . . [Wald's] complicating of the received canon and deepening of individual political conflicts . . . makes one look forward to the final panel of his triptych.”--The Nation

"Readable and informative. . . . A garden of reader delights."--Jewish Book World

"Aims to interpret tolerantly and understandingly the leftist writers' political somersaults, which have often been derided. . . . Wald skillfully and knowledgeably handles the political motives, context, and implications of those writers' works.""--Journal of American History