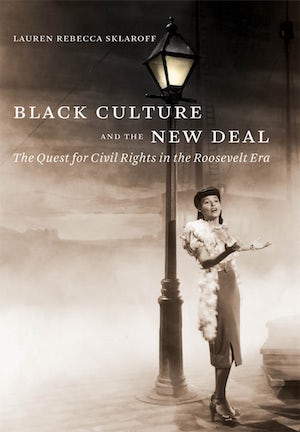 In the 1930s, the Roosevelt administration--unwilling to antagonize a powerful southern congressional bloc--refused to endorse legislation that openly sought to improve political, economic, and social conditions for African Americans. Instead, as historian Lauren Rebecca Sklaroff shows, the administration recognized and celebrated African Americans by offering federal support to notable black intellectuals, celebrities, and artists.

Sklaroff illustrates how programs within the Federal Arts Projects and several war agencies gave voice to such notable African Americans as Lena Horne, Joe Louis, Duke Ellington, and Richard Wright, as well as lesser-known figures. She argues that these New Deal programs represent a key moment in the history of American race relations, as the cultural arena provided black men and women with unique employment opportunities and new outlets for political expression. Equally important, she contends that these cultural programs were not merely an attempt to appease a black constituency but were also part of the New Deal's larger goal of promoting a multiracial nation. Yet, while federal projects ushered in creativity and unprecedented possibilities, they were also subject to censorship, bigotry, and political machinations.

With numerous illustrations, Black Culture and the New Deal offers a fresh perspective on the New Deal's racial progressivism and provides a new framework for understanding black culture and politics in the Roosevelt era.

“Will be of interest to all concerned with New Deal history and the origins of civil rights. . . . Recommended.”--Choice

“Sklaroff’s book convincingly reveals the New Deal era as an important and underexamined link in the related narratives of African American cultural development and the civil rights movement.”--African American Review

"An accessible study that offers a fresh understanding of race-related programs during the Roosevelt era by showing how "cultural emancipation" complemented economic policies to improve life for all Americans. . . . A valuable addition to scholarship on civil rights, the Roosevelt administration, and cultural politics."-- Journal of Southern History

"Provid[es] a refreshing new perspective on the ways in which African Americans carved out spaces for civil rights activism in public life. . . . A valuable addition to the growing history of the 'long' civil rights movement."--H-Net Reviews

"A nuanced and highly effective exploration of the discourses about race and inequality in the theater, radio, print culture, and motion pictures of the era. . . . Makes a major contribution to the history of the era."--Reviews in American History

"Offers a fresh perspective on the New Deal's racial progressivism and a new framework for understanding black culture and politics in the Roosevelt era and beyond."--SirReadaLot.org