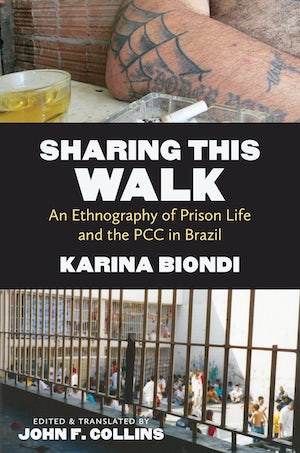 The Primeiro Comando do Capital (PCC) is a São Paulo prison gang that since the 1990s has expanded into the most powerful criminal network in Brazil. Karina Biondi’s rich ethnography of the PCC is uniquely informed by her insider-outsider status. Prior to his acquittal, Biondi’s husband was incarcerated in a PCC-dominated prison for several years. During the period of Biondi’s intense and intimate visits with her husband and her extensive fieldwork in prisons and on the streets of São Paulo, the PCC effectively controlled more than 90 percent of São Paulo’s 147 prison facilities.

Available for the first time in English, Biondi's riveting portrait of the PCC illuminates how the organization operates inside and outside of prison, creatively elaborating on a decentered, non-hierarchical, and far-reaching command system. This system challenges both the police forces against which the PCC has declared war and the methods and analytic concepts traditionally employed by social scientists concerned with crime, incarceration, and policing. Biondi posits that the PCC embodies a “politics of transcendence,” a group identity that is braided together with, but also autonomous from, its decentralized parts. Biondi also situates the PCC in relation to redemocratization and rampant socioeconomic inequality in Brazil, as well as to counter-state movements, crime, and punishment in the Americas.

Karina Biondi, the author of Junto e Misturdado: uma etnografía do PCC, holds a doctorate in social anthropology from the Federal University of São Carlos in São Paulo.
For more information about Karina Biondi, visit the Author Page.

Editor and translator John F. Collins is associate professor of anthropology at Queens College and the Graduate Center of the City University of New York and the author of Revolt of the Saints: Memory and Redemption in the Twilight of Brazilian Racial Democracy.
For more information about John F. Collins, visit the Author Page.

“This elegant and rigorously argued book offers a compelling critique of existing depictions of prison life in Brazil and challenges entrenched understandings of 'organised crime.'”--London School of Economics Review of Books

“One of the most insightful works on ‘inner’ Brazilian society.”--Current Anthropology

“This is the best kind of ethnography, in which the experience of the subjects genuinely determines the ideas developed.”--Luso-Brazilian Review

“Karina Biondi’s book has the potential to transform the field of political anthropology well beyond any continental boundary. Recasting standard anthropological paradigms of politics, power, and crime, it is an ethnography of politics and political possibilities. It is also an engaging, even riveting, read. Despite the profound analyses it contains, it is written in such a clear style as to be perfectly accessible and appropriate as a key text for introductory or intermediate courses in anthropology, sociology, Latin American studies, and political science.”--Magnus Course, University of Edinburgh

“Karina Biondi’s bold ethnography . . . gives new meaning to the notion that anthropologists should work from wherever we find ourselves. . . . Biondi invites us to consider the real costs of extreme social inequality in Brazil which, alongside of the inhumanity of the criminal justice system and the de facto civil war between police and the marginal, prefigures circumstances in which an illicit, criminal organization is able to produce far more in the way of conflict management and public security than the official, 'legitimate' state.”--Journal of Latin American and Caribbean Anthropology