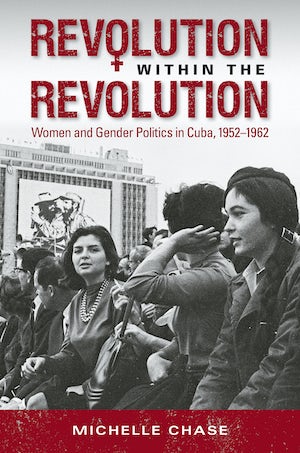 A handful of celebrated photographs show armed female Cuban insurgents alongside their compañeros in Cuba's remote mountains during the revolutionary struggle. However, the story of women's part in the struggle's success has only now received comprehensive consideration in Michelle Chase's history of women and gender politics in revolutionary Cuba. Restoring to history women's participation in the all-important urban insurrection, and resisting Fidel Castro's triumphant claim that women's emancipation was handed to them as a "revolution within the revolution," Chase's work demonstrates that women's activism and leadership was critical at every stage of the revolutionary process.

Tracing changes in political attitudes alongside evolving gender ideologies in the years leading up to the revolution, Chase describes how insurrectionists mobilized familiar gendered notions, such as masculine honor and maternal sacrifice, in ways that strengthened the coalition against Fulgencio Batista. But, after 1959, the mobilization of women and the societal transformations that brought more women and young people into the political process opened the revolutionary platform to increasingly urgent demands for women's rights. In many cases, Chase shows, the revolutionary government was simply formalizing popular initiatives already in motion on the ground thanks to women with a more radical vision of their rights.

Michelle Chase is assistant professor of history at Pace University.
For more information about Michelle Chase, visit the Author Page.

“Chase’s nuanced analysis of the centrality of gender politics to revolutionary struggle merits praise for opening up a promising new direction in the study of the Cuban Revolution, and for reinvigorating dialogue about the Revolution’s social legacy in this momentous time in US-Cuban relations.”--Choice

“The research for this book is extensive, and Chase is evenhanded in her collection and interpretation of the materials.”--American Historical Review

“A work that should attract not only historians of the Cuban Revolution but anyone interested in gender and the history of women in Latin America.”--Alfonso Salgado, Nuevo Mundo Mundos Nuevos

“An innovative and accessible text that underscores the possibility and malleability of early moments of revolution.”--Hispanic American Historical Review

“Centering women’s experiences and perspectives in a provocative reconsideration of the Cuban Revolution, Revolution within the Revolution disrupts official narratives that depict prerevolutionary Communists' rise to dominance within the Castro government as a harmonious and inevitable process, while demonstrating that revolutionary leaders' attention to women's issues after 1959 was reactive rather than proactive, a response to the vast but forgotten grassroots mobilization of women in Cuba's urban centers after the revolution's triumph.”--Latin American Research Review