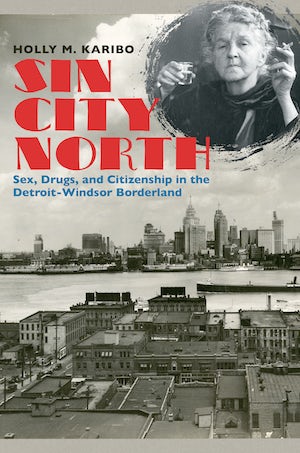 The early decades of the twentieth century sparked the Detroit-Windsor region's ascendancy as the busiest crossing point between Canada and the United States, setting the stage for socioeconomic developments that would link the border cities for years to come. As Holly M. Karibo shows, this border fostered the emergence of illegal industries alongside legal trade, rapid industrial development, and tourism. Tracing the growth of the two cities' cross-border prostitution and heroin markets in the late 1940s and the 1950s, Sin City North explores the social, legal, and national boundaries that emerged there and their ramifications.

In bars, brothels, and dance halls, Canadians and Americans were united in their desire to cross racial, sexual, and legal lines in the border cities. Yet the increasing visibility of illicit economies on city streets—and the growing number of African American and French Canadian women working in illegal trades—provoked the ire of moral reformers who mobilized to eliminate them from their communities. This valuable study demonstrates that struggles over the meaning of vice evolved beyond definitions of legality; they were also crucial avenues for residents attempting to define productive citizenship and community in this postwar urban borderland.

“Expertly demonstrates the ways in which images of prostitutes and drug dealers were used in political discourse in Canada and the United States. . . . Complicates a transnational story that is often oversimplified and overlooked.” --Michigan Historical Review

“Karibo's writing is engaging, her reasoning is solid, and her conclusions make an important contribution to the histories of drugs and alcohol, the sex industry, cross-border trade, tourism, and early twentieth century changes to national identity, racial politics, and transborder economies.”--Canadian Journal of History

“Makes a unique contribution to the expanding field of northern borderland studies through the perspective of the vice economies of the mid-twentieth century. . . . a valuable read for students, scholars, and a general public interested in local history and in the borderland history of vice and its meaning in the postwar urban border.”--Journal of the History of Sexuality

"Dr. Karibo is to be congratulated on what can only be described as a compelling narrative of vice on the borders and the intricate relationships between various borderlands, both real and metaphorical, in the Detroit-Windsor area."--Dan Malleck, Brock University

"Holly Karibo's lively and engaging Sin City North makes a strong contribution to scholarship on urban history and U.S.-Canadian relations. Its investigation of the informal economy of vice in the Motor City and its Canadian sister shows us the underside of the consumer culture of the postwar decades."--Elizabeth Faue, Wayne State University

“Original, ambitious, and clever, Sin City North transposes the story of postwar borderlands vice—Tijuana and all that—to the Detroit-Windsor region. Taking us beyond Prohibition-era bootleggers, Karibo shows how sex tourism and heroin trafficking flourished in the adjacent cities during the not-so-tranquil 1940s and 1950s, when vice became intertwined with Cold War anxieties and the simmering politics of class, gender, and race.”--David T. Courtwright, author of Dark Paradise and Forces of Habit