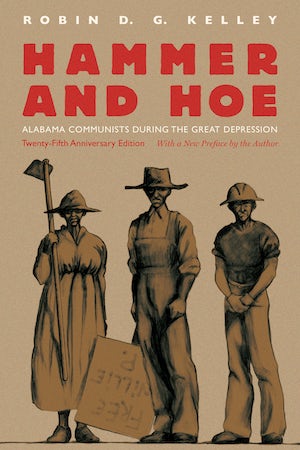 A groundbreaking contribution to the history of the "long Civil Rights movement," Hammer and Hoe tells the story of how, during the 1930s and 40s, Communists took on Alabama's repressive, racist police state to fight for economic justice, civil and political rights, and racial equality.

The Alabama Communist Party was made up of working people without a Euro-American radical political tradition: devoutly religious and semiliterate black laborers and sharecroppers, and a handful of whites, including unemployed industrial workers, housewives, youth, and renegade liberals. In this book, Robin D. G. Kelley reveals how the experiences and identities of these people from Alabama's farms, factories, mines, kitchens, and city streets shaped the Party's tactics and unique political culture. The result was a remarkably resilient movement forged in a racist world that had little tolerance for radicals.

After discussing the book's origins and impact in a new preface written for this twenty-fifth-anniversary edition, Kelley reflects on what a militantly antiracist, radical movement in the heart of Dixie might teach contemporary social movements confronting rampant inequality, police violence, mass incarceration, and neoliberalism.

"A fascinating and indispensable contribution to the history of American radicalism and to black history."--Nation

"Reshaping southern history by restoring its radical past to historical salience, Robin Kelley writes an account that beautifully balances culture, government, economics, and ideology. His handling of race represents one of the book's greatest strengths, for Kelley keeps race at the center--as it was in the South in the 1930s--yet at the same time he traces the complexity of working-class consciousness among blacks and whites and realizes that matters of class and chronology influenced the severity of the color line."--Nell Irvin Painter, Princeton University

"Should serve as a model for historians seeking to recapture the untold story of other southern radicals during the 1930s."--Journal of Southern History