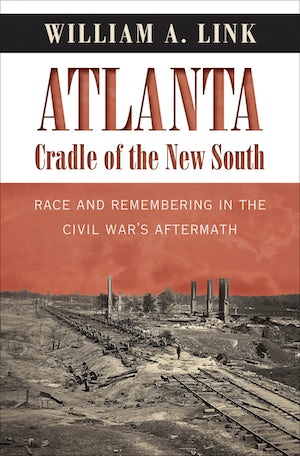 After conquering Atlanta in the summer of 1864 and occupying it for two months, Union forces laid waste to the city in November. William T. Sherman's invasion was a pivotal moment in the history of the South and Atlanta's rebuilding over the following fifty years came to represent the contested meaning of the Civil War itself. The war's aftermath brought contentious transition from Old South to New for whites and African Americans alike. Historian William Link argues that this struggle defined the broader meaning of the Civil War in the modern South, with no place embodying the region's past and future more clearly than Atlanta.

Link frames the city as both exceptional--because of the incredible impact of the war there and the city's phoenix-like postwar rise--and as a model for other southern cities. He shows how, in spite of the violent reimposition of white supremacy, freedpeople in Atlanta built a cultural, economic, and political center that helped to define black America.

William A. Link is Richard J. Milbauer Professor of History at the University of Florida. He is author or editor of thirteen books, including Righteous Warrior: Jesse Helms and the Rise of Modern Conservatism.
For more information about William A. Link, visit the Author Page.

“An unparalleled introduction to the history of nineteenth-century Atlanta. . . . Link’s pioneering and engaging study merits the attention of professional historians and general readers alike.”--Register of the Kentucky Historical Society

“This is an important book, and William Link shows that Atlanta was indeed a place where the past and the future, the Civil War and the New South, race and economics, and memory and reality converged.”--North Carolina Historical Review

“No reader will come away . . . doubting Atlanta’s status as the cradle of the New South.”--Journal of Southern History

“Link has . . . uncovered some fascinating stories of how Atlanta became such a symbol in a contest over the memory of the war and the meaning of the South’s future.”--American Historical Review

"Its strength lies in its detailed explication of the New South narrative of destruction and rebirth and its successful exclusion of African Americans."--Georgia Historical Quarterly

"Meticulously researched . . . Link's book is a well-crafted study well worth the attention of those interested in the early dynamics of race relations."--H-Net Reviews

Read: In a guest blog post, William A. Link briefly depicts the great destruction Atlanta faced at the end of the Civil War and how it embraced a new narrative as the flagship of the “New South.” Read "Atlanta Rising After Sherman."