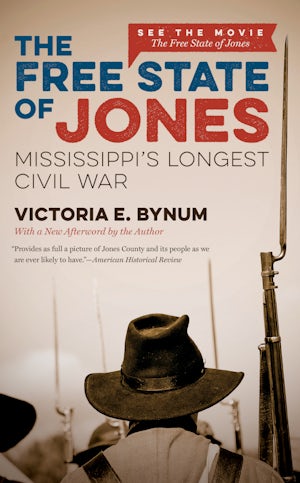 Not for Sale in British Commonwealth except Canada

Between late 1863 and mid-1864, an armed band of Confederate deserters battled Confederate cavalry in the Piney Woods region of Jones County, Mississippi. Calling themselves the Knight Company after their captain, Newton Knight, they set up headquarters in the swamps of the Leaf River, where they declared their loyalty to the U.S. government.

The story of the Jones County rebellion is well known among Mississippians, and debate over whether the county actually seceded from the state during the war has smoldered for more than a century. Adding further controversy to the legend is the story of Newt Knight's interracial romance with his wartime accomplice, Rachel, a slave. From their relationship there developed a mixed-race community that endured long after the Civil War had ended, and the ambiguous racial identity of their descendants confounded the rules of segregated Mississippi well into the twentieth century.

Victoria Bynum traces the origins and legacy of the Jones County uprising from the American Revolution to the modern civil rights movement. In bridging the gap between the legendary and the real Free State of Jones, she shows how the legend--what was told, what was embellished, and what was left out--reveals a great deal about the South's transition from slavery to segregation; the racial, gender, and class politics of the period; and the contingent nature of history and memory.

In a new afterword, Bynum updates readers on recent scholarship, current issues of race and Southern heritage, and the coming movie that make this Civil War story essential reading.

The Free State of Jones film, starring Matthew McConaughey, Gugu Mbatha-Raw, and Keri Russell, will be released in May 2016.

"Bynum is to be saluted not only for her profound scholarship but for her evenhanded accounts of matters that remain volatile and controversial. . . . [This] book should be praised as an original and cogent piece of scholarship on a devilishly complicated and demanding subject."--Washington Times

“An important book that may cause historians who are skeptical about putting too much stress on an 'inner' Civil War to rethink their position."--American Historical Review

"The Free State of Jones is clearly a story that needs to be told, and Bynum has done impressive research to bring it to a modern audience. She uses a wide range of social history sources to trace the long history not only of Newt Knight and his gang but also of their ancestors. She is interested in social structure, economic patterns, migration, religious revivals, family formation, and community relations--in short, a genealogy of the entire Jones County community before they became famous during and after the Civil War. This is an ambitious project that brings the Jones County community to life for scholars, students, and lay readers."--Altina L. Waller, author of Feud: Hatfields, McCoys, and Social Change in Appalachia, 1860-1900

"Local studies have made us increasingly aware of the many different ways in which southerners experienced the Civil War. Few communities fought as much of the war on their own terms or generated as distorted yet profound a legacy afterward as did the men and women of this renegade county in Mississippi's Piney Woods. It's a fascinating story, and Victoria Bynum tells it remarkably well."--John C. Inscoe, coauthor of The Heart of Confederate Appalachia: Western North Carolina in the Civil War