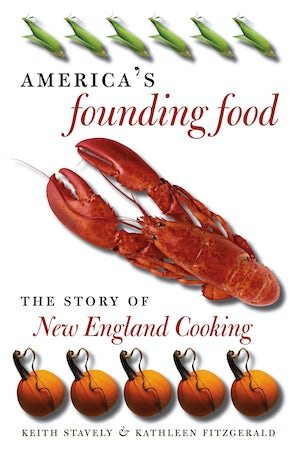 From baked beans to apple cider, from clam chowder to pumpkin pie, Keith Stavely and Kathleen Fitzgerald's culinary history reveals the complex and colorful origins of New England foods and cookery. Featuring hosts of stories and recipes derived from generations of New Englanders of diverse backgrounds, America's Founding Food chronicles the region's cuisine, from the English settlers' first encounter with Indian corn in the early seventeenth century to the nostalgic marketing of New England dishes in the first half of the twentieth century.

Focusing on the traditional foods of the region--including beans, pumpkins, seafood, meats, baked goods, and beverages such as cider and rum--the authors show how New Englanders procured, preserved, and prepared their sustaining dishes. Placing the New England culinary experience in the broader context of British and American history and culture, Stavely and Fitzgerald demonstrate the importance of New England's foods to the formation of American identity, while dispelling some of the myths arising from patriotic sentiment.

At once a sharp assessment and a savory recollection, America's Founding Food sets out the rich story of the American dinner table and provides a new way to appreciate American history.

Keith Stavely and Kathleen Fitzgerald--New Englanders, librarians, independent scholars, and husband and wife--live in Jamestown, Rhode Island. Stavely is director of Fall River (Mass.) Public Library and has written several books on Puritanism in both old and New England. Fitzgerald is a librarian at Newport (R.I.) Public Library.
For more information about Keith Stavely, visit the Author Page.

Fitzgerald is a librarian at Newport (R.I.) Public Library.
For more information about Kathleen Fitzgerald, visit the Author Page.

"Helps us read between the lines of cookbooks as consumer guides. . . . Makes a convincing argument that a very self-conscious New England, proud of its contributions to the establishment of democracy in America, set in the 1800s a foodways pattern much copied across the country. We will become the wiser as we observe how that pattern was overturned in more recent times."--Gastronomica

"Stavely and Fitzgerald . . . provide a thoroughly researched, well-referenced, and fluently written history of New England cooking, largely centered on the colonial through the federalist periods. In doing so, they ask important questions . . . that make the story compelling, more than a survey of foods eaten and cooked. They meet their goal of approaching the subject with 'both appreciation and skepticism' and do so in inventive ways, showing the dramatic cultural and economic evolution of New England foodways. . . . America's Founding Food surveys the legacy of New England food history in an accessible way."--Choice