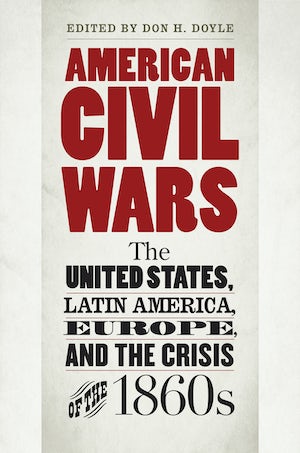 American Civil Wars takes readers beyond the battlefields and sectional divides of the U.S. Civil War to view the conflict from outside the national arena of the United States. Contributors position the American conflict squarely in the context of a wider transnational crisis across the Atlantic world, marked by a multitude of civil wars, European invasions and occupations, revolutionary independence movements, and slave uprisings—all taking place in the tumultuous decade of the 1860s. The multiple conflicts described in these essays illustrate how the United States’ sectional strife was caught up in a larger, complex struggle in which nations and empires on both sides of the Atlantic vied for the control of the future. These struggles were all part of a vast web, connecting not just Washington and Richmond but also Mexico City, Havana, Santo Domingo, and Rio de Janeiro and--on the other side of the Atlantic--London, Paris, Madrid, and Rome. This volume breaks new ground by charting a hemispheric upheaval and expanding Civil War scholarship into the realms of transnational and imperial history. American Civil Wars creates new connections between the uprisings and civil wars in and outside of American borders and places the United States within a global context of other nations.

Don H. Doyle is McCausland Professor of History at the University of South Carolina.
For more information about Don H. Doyle, visit the Author Page.

"An utterly fascinating set of essays, a fine collection of cutting edge international scholarship examining the political and societal reverberations of the American Civil War. . . . Highly recommended reading for any student of the North-South conflict."--Andrew Wagenhoffer, Civil War Books and Authors

“For those with any interest in the history of international relations, give American Civil Wars a shot.”--Civil War News

“An excellent thought piece, forcing historians to look beyond the narrow confines of the nation-state to place the Civil War into a global framework.”--The Register of the Kentucky Historical Society

“Offers the reader a richer understanding of the hemispheric context in which the Civil War was fought.”--The Journal of the Civil War Era

“A welcome contribution to the historiography of the 1860s that justifies its title and establishes that a conflict so associated with the United States over the fate of slavery and concepts of republican institutions was not unique to the United States but also extended to Latin America and Western Europe.”--The Journal of Southern History

“The strongest aspects of this work emerge from the connections across the essays. The underlying contests between republicanism and monarchy, freedom and slavery, shine through in each work. . . . This volume will help to familiarize American Civil War historians to the global implications of the conflict and the ripple effects of Union and Confederate diplomatic efforts. . . . It deserves a place on the shelf of any scholar of the nineteenth-century Atlantic world.”--H-Net Reviews