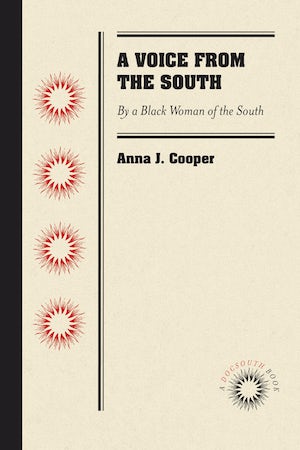 Published in 1892, A Voice from the South is the only book published by one of the most prominent African American women scholars and educators of her era. Born a slave, Anna Julia Haywood Cooper would go on to become the fourth African American woman to earn a doctoral degree. Cooper became a prominent member of the black community in Washington, D.C., serving as principal at M Street High School, during which time she wrote A Voice from the South. In it, she engages a variety of issues, including women’s rights, racial progress, segregation, and the education of black women. Cooper also discusses a number of authors and their representations of African Americans, including Harriet Beecher Stowe, Albion Tourgée, George Washington Cable, William Dean Howells, and Maurice Thompson, reaching the conclusion that an accurate depiction had yet to be written.

Anna Julia Haywood Cooper (1858–1964) was born in Raleigh, N.C., and spent her early life as a slave in the home of George Washington Haywood. At age nine she began a formal education intended to train blacks to become educators of former slaves. She received an M.A. from Oberlin College and a Ph.D. in history from the University of Paris–Sorbonne.
For more information about Anna J. Cooper, visit the Author Page.