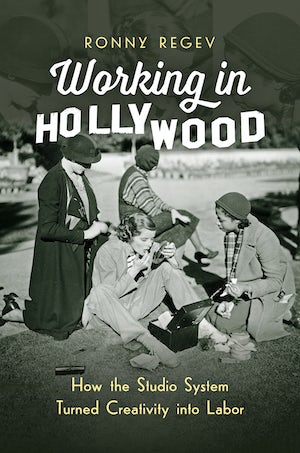 A history of the Hollywood film industry as a modern system of labor, this book reveals an important untold story of an influential twentieth-century workplace. Ronny Regev argues that the Hollywood studio system institutionalized creative labor by systemizing and standardizing the work of actors, directors, writers, and cinematographers, meshing artistic sensibilities with the efficiency-minded rationale of industrial capitalism. The employees of the studios emerged as a new class: they were wage laborers with enormous salaries, artists subjected to budgets and supervision, stars bound by contracts. As such, these workers--people like Clark Gable, Katharine Hepburn, and Anita Loos--were the outliers in the American workforce, an extraordinary working class.

Through extensive use of oral histories, personal correspondence, studio archives, and the papers of leading Hollywood luminaries as well as their less-known contemporaries, Regev demonstrates that, as part of their contribution to popular culture, Hollywood studios such as Paramount, Warner Bros., and MGM cultivated a new form of labor, one that made work seem like fantasy.

Ronny Regev is assistant professor of history at the Hebrew University of Jerusalem.
For more information about Ronny Regev, visit the Author Page.

“A real feat of primary investigation and rich synthesis, then, that demands a wider audience and contributes steadfastly to our revised understandings of the mechanisms of working in the movie machine. Working in Hollywood is an excellent chronicle of the dream factory laid bare.”--Labour History Review

"The book is an absolute pleasure to read--well organized, remarkably lucid, and with broad significance for labor and cultural history. As labor history and the history of capitalism are remaking each other, this book is a model study of the transformation of work in the twentieth century. It is simultaneously confident, careful, and convincing in its arguments--a rare combination."--Lawrence Glickman, Cornell University

"Written with grace and intelligence, this wonderfully engaging book fills an astonishing gap in the history of labor in the Hollywood film industry."--Saverio Giovacchini, University of Maryland