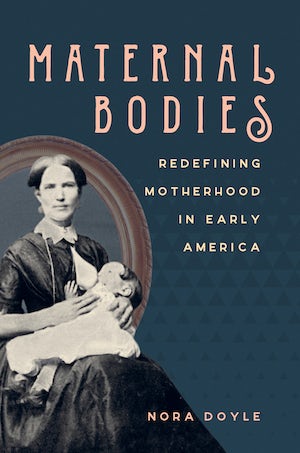 In the second half of the eighteenth century, motherhood came to be viewed as women's most important social role, and the figure of the good mother was celebrated as a moral force in American society. Nora Doyle shows that depictions of motherhood in American culture began to define the ideal mother by her emotional and spiritual roles rather than by her physical work as a mother. As a result of this new vision, lower-class women and non-white women came to be excluded from the identity of the good mother because American culture defined them in terms of their physical labor.

However, Doyle also shows that childbearing women contradicted the ideal of the disembodied mother in their personal accounts and instead perceived motherhood as fundamentally defined by the work of their bodies. Enslaved women were keenly aware that their reproductive bodies carried a literal price, while middle-class and elite white women dwelled on the physical sensations of childbearing and childrearing. Thus motherhood in this period was marked by tension between the lived experience of the maternal body and the increasingly ethereal vision of the ideal mother that permeated American print culture.

Nora Doyle is assistant professor of history at Salem College.
For more information about Nora Doyle, visit the Author Page.

"Grounded in feminist theory and based on the author's dissertation research, this timely work takes on a scholarly subject in a readable way."—Library Journal, starred review

“By examining the dissonance between personal and cultural definitions of motherhood and by reclaiming women’s physical bodies as significant to the historical narrative, Doyle provides a more complete understanding of the historical experiences of women, especially mothers.”—Choice

“Both continues an ongoing historical dialogue about the differences between socially-constructed gender ideals and the realities of women’s lives, but also begins a new chapter in that dialogue by using the body as a central category of analysis.”—Civil War Book Review

“A thought-provoking analysis that raises important questions for further research. Both historical and current debates on contraception, abortion, career paths, domesticity, gender, marriage, and more can be better understood thanks to Doyle’s insights.”—American Historical Review

“An important contribution to the history of reproduction, motherhood, family, and gender. A compelling read full of rich sources, Doyle has written a book sure to convince others of the importance of the body within the history of motherhood and beyond.”—Early American History

“A stunningly researched, well-argued study on the experiences of motherhood in British colonial America and the early United States. . . . Doyle examines the break between the lived and imagined experiences of motherhood, creating a series of paired chapters on pregnancy and childbirth, breastfeeding, and the portrayal of maternal bodies in popular culture. Read in the context of current debates over motherhood and maternal and infant health, the book offers a particularly timely lesson on historical continuity.”—H-Net Reviews