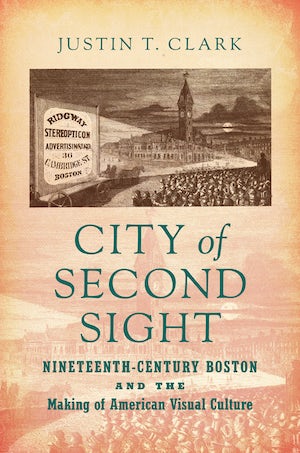 In the decades before the U.S. Civil War, the city of Boston evolved from a dilapidated, haphazardly planned, and architecturally stagnant provincial town into a booming and visually impressive metropolis. In an effort to remake Boston into the “Athens of America,” neighborhoods were leveled, streets straightened, and an ambitious set of architectural ordinances enacted. However, even as residents reveled in a vibrant new landscape of landmark buildings, art galleries, parks, and bustling streets, the social and sensory upheaval of city life also gave rise to a widespread fascination with the unseen. Focusing his analysis between 1820 and 1860, Justin T. Clark traces how the effort to impose moral and social order on the city also inspired many—from Transcendentalists to clairvoyants and amateur artists—to seek out more ethereal visions of the infinite and ideal beyond the gilded paintings and glimmering storefronts.

By elucidating the reciprocal influence of two of the most important developments in nineteenth-century American culture—the spectacular city and visionary culture—Clark demonstrates how the nineteenth-century city is not only the birthplace of modern spectacle but also a battleground for the freedom and autonomy of the spectator.

“…an exciting exploration of the symbiosis between human vision, the material visual, and the visionary in Boston in the three decades before the Civil War.” – The Journal of American History

“City of Second Sight adds to our understanding of the rise of urban culture in New England’s premier city during the antebellum era.” – Journal of the Early Republic

“A rounded and absorbing account . . . sweeping in its aim and thoroughly convincing.” --Journal of Social History

"City of Second Sight is deeply researched, tightly argued, expertly composed. Its premise that a wariness about visual culture resulted in visionary culture is significant not only for the study of visual culture but also for American religious and intellectual history.” --Reviews in American History

“A well-researched and imaginatively conceived history. . . . Clark makes a particularly significant contribution to the history of urban spectatorship in his exploration and articulation of the ways that individuals interpreted, valued, and designed visual experiences in Boston.” --The New England Quarterly Review

“This book stands out for its conceptual virtuosity, imaginative and wide-ranging research, and subtle and sophisticated interpretation of antebellum Boston’s class dynamics as they were catalyzed by the perceived moral danger and moral potential of the sense of sight.”—Tamara Plakins Thornton, University at Buffalo