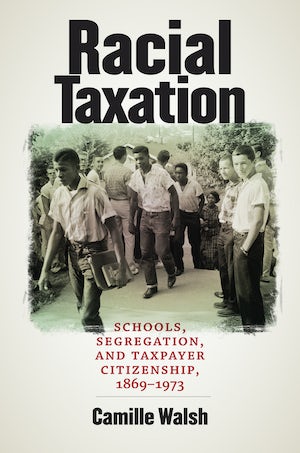 In the United States, it is quite common to lay claim to the benefits of society by appealing to “taxpayer citizenship”--the idea that, as taxpayers, we deserve access to certain social services like a public education. Tracing the genealogy of this concept, Camille Walsh shows how tax policy and taxpayer identity were built on the foundations of white supremacy and intertwined with ideas of whiteness. From the origins of unequal public school funding after the Civil War through school desegregation cases from Brown v. Board of Education to San Antonio v. Rodriguez in the 1970s, this study spans over a century of racial injustice, dramatic courtroom clashes, and white supremacist backlash to collective justice claims.

Incorporating letters from everyday individuals as well as the private notes of Supreme Court justices as they deliberated, Walsh reveals how the idea of a “taxpayer” identity contributed to the contemporary crises of public education, racial disparity, and income inequality.

Camille Walsh is assistant professor of American and Ethnic Studies and Law, Economics, and Public Policy at the University of Washington Bothell.
For more information about Camille Walsh, visit the Author Page.

“Persuasively argues that access to education has historically been limited by race but cloaked in terms of taxpayer status.”--Journal of Southern History

“This work, with its consideration of race-based tax policy, adds breadth to the conversation about the long history of racial discrimination in the American education system and adds depth through the explicit connection Walsh draws between tax-payer identity and citizenship.”--History of Education Quarterly

“Examines the origins and fascinating history of taxpayer citizenship as it relates to public education. . . . Original and interesting.”--Journal of American History

“Racial Taxation is, from start to finish, a vivid depiction of the underscrutinized fiscal history of elementary through secondary education in the United States. . . . Walsh argues convincingly that education finance in the modern era (i.e., post–Brown v. Board) is inextricably linked to explicitly racist finance structures of the past. . . . [and] uncovers a fascinating history of uses of the term ‘taxpayer’. . . . [That] shows a more complex and, indeed, inspiring story: the term ‘taxpayer’ has been embraced and celebrated by a variety of nonwhite racial groups fighting for inclusion and equality before the law.”--Michigan Law Review

“Racial Taxation makes a substantive and compelling contribution to the intersections of taxation, school finance, racism, Whiteness, and citizenship. . . . Historians of education throughout the world should draw upon this book as a model.”--History of Education

“Walsh's discovery of a popular legal consciousness that defined citizenship with reference to taxation is fresh, striking, original, and highly significant. In a rhetorical landscape filled with pitfalls and ironies, Walsh guides the reader through not only the linguistic thickets but also the financial and educational realities behind them.”--Robin Einhorn, University of California, Berkeley