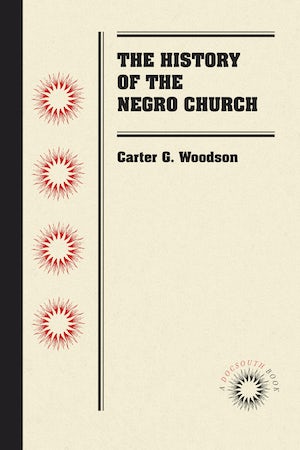 Carter Woodson (1875-1950) was a prominent black leader and intellectual of the first half of the twentieth century. Born in Virginia in 1875 to formerly enslaved parents, he was educated at Berea College in Kentucky, the University of Chicago, and finally, Harvard, where he earned his Ph.D. in History. Woodson championed awareness of black historical experience by teaching and initiating the first Black History Week, which became the basis for the later Black History Month. He was a tireless writer also who published many volumes during his life, including his classic The Mis-Education of the Negro (1933).

Published in 1921, The History of the Negro Church traces the construction of the black church in America from colonial times through the early years of the twentieth century. The book unfolds a series of biographical sketches of male church leaders through the decades, and offers a broad critique of church experience. Beginning with early church movements in the North and efforts to minister to slaves in the South, Woodson describes the origins of religious instruction for a race that he characterizes as "neglected" among an unenlightened colonial population. The book offers a sophisticated and roving history of the limits of black inclusion in church and state. Indeed, Woodson’s penetrating vision of the deep themes of American history and his incisive understanding of spiritual character make for a lively passage through a long history. Many of his observations about the class, caste, and church seem only more relevant with the passage of time.

Carter Woodson (1875-1950) was a prominent black leader and intellectual of the first half of the twentieth century who was born in Virginia to formerly enslaved parents. The second African American to receive a Ph.D. at Harvard, he was a seminal figure for increasing the visibility of black experience in American history.
For more information about Carter G. Woodson, visit the Author Page.