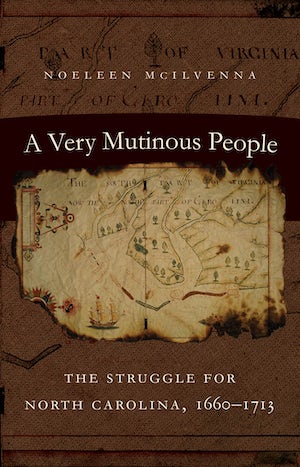 Historians have often glorified eighteenth-century Virginia planters' philosophical debates about the meaning of American liberty. But according to Noeleen McIlvenna, the true exemplars of egalitarian political values had fled Virginia's plantation society late in the seventeenth century to create the first successful European colony in the Albemarle, in present-day North Carolina.

Making their way through the Great Dismal Swamp, runaway servants from Virginia joined other renegades to establish a free society along the most inaccessible Atlantic coastline of North America. They created a new community on the banks of Albemarle Sound, maintaining peace with neighboring Native Americans, upholding the egalitarian values of the English Revolution, and ignoring the laws of the mother country.

Tapping into previously unused documents, McIlvenna explains how North Carolina's first planters struggled to impose a plantation society upon the settlers and how those early small farmers, defending a wide franchise and religious toleration, steadfastly resisted. She contends that the story of the Albemarle colony is a microcosm of the greater process by which a conglomeration of loosely settled, politically autonomous communities eventually succumbed to hierarchical social structures and elite rule. Highlighting the relationship between settlers and Native Americans, this study leads to a surprising new interpretation of the Tuscarora War.

"McIlvenna . . . weave[s] together a vivid and coherent narrative of the political struggles that transformed the colony. . . . Introduces an insubordinate and defiant world previously overlooked by colonial historians."--North Carolina Historical Review

"This well-written volume is highly recommended. McIlvenna successfully integrates this little-known society into a wider Atlantic world and explains the meaningful ways that early North Carolina was truly different from its hierarchical neighbors."--Journal of American History

"An intriguing interpretation of Albemarle's tumultuous early years. . . . An important addition to the historiography of North Carolina and that surrounding the rise of the planter class."--Virginia Magazine of History and Biography

"Creatively utilizing an array of period accounts, McIlvenna reexamines this often-overlooked part of the Carolinas and convincingly argues a bold new interpretation of the Albemarle."--The Georgia Historical Quarterly

"McIlvenna demonstrates that North Carolina settlers marched to the beat of their own drums, making the state's early history profoundly different from that of any other early North American colony. A Very Mutinous People puts forth an important argument, fleshes out an ill-understood part of North Carolina's early history, and unearths a forgotten episode of early modern resistance to political and economic dependence."--Marjoleine Kars, author of Breaking Loose Together: The Regulator Rebellion in Pre-Revolutionary North Carolina

"McIlvenna's analysis is judicious in its assessments, is careful in the weighing of evidence, and most important, helps us understand North Carolina's development in the broader context of English colonization."--Alan Gallay, The Ohio State University