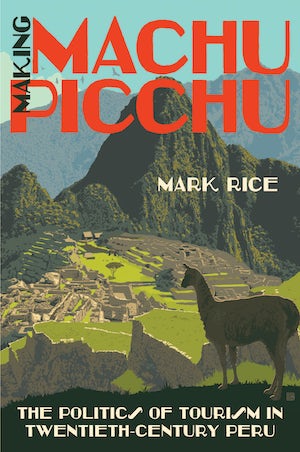 Speaking at a 1913 National Geographic Society gala, Hiram Bingham III, the American explorer celebrated for finding the “lost city” of the Andes two years earlier, suggested that Machu Picchu “is an awful name, but it is well worth remembering.” Millions of travelers have since followed Bingham’s advice. When Bingham first encountered Machu Picchu, the site was an obscure ruin. Now designated a UNESCO World Heritage Site, Machu Picchu is the focus of Peru’s tourism economy. Mark Rice’s history of Machu Picchu in the twentieth century—from its “discovery” to today’s travel boom—reveals how Machu Picchu was transformed into both a global travel destination and a powerful symbol of the Peruvian nation.

Rice shows how the growth of tourism at Machu Picchu swayed Peruvian leaders to celebrate Andean culture as compatible with their vision of a modernizing nation. Encompassing debates about nationalism, Indigenous peoples' experiences, and cultural policy—as well as development and globalization—the book explores the contradictions and ironies of Machu Picchu's transformation. On a broader level, it calls attention to the importance of tourism in the creation of national identity in Peru and Latin America as a whole.


For more information about Mark Rice, visit the Author Page.

“A serious academic work about a subject that historians have only recently taken seriously. . . . Offers a well-researched history of tourism and also gives readers many insights into the relationship between pre-Columbian history and Peruvian state-building in the modern era.”--H-Net Reviews

“Making Machu Picchu is a most welcome contribution to historical approaches to tourism development in Latin America. With its lively prose and marvelous detail, this book should be enjoyed by students, researchers, and a wider public, perhaps including many who have themselves undertaken journeys to the famed site that was newly “discovered” over a century ago.”--E.I.A.L (Estudios Interdisciplinarios de América Latina y el Caribe)

“An authoritative treatment of the not-so-inevitable travails of Machu Picchu’s role in the evolution of regional identity. . . . Rice weaves a graceful and coherent narrative of the intellectual and economic forces that eventually thrust Machu Picchu into its unlikely role . . . as a symbol—indeed, the symbol, by the turn of the twenty-first century—of national identity.”--American Historical Review

“Rice adeptly shows how shifting dynamics between regional autonomy, national governmental policies and transnational capital shaped the story of the restoration, management and promotion of Machu Picchu. . . . Those with an interest in the social eﬀects of heritage tourism . . . or the history of early twentieth-century geographical and archaeological expeditions or of twentieth-century Peru, among other topics, will ﬁnd much of value in [this text].”--Anthropology in Action

“Mark Rice’s excellent Making Machu Picchu shows how strange this Inca estate’s rise has been. . . . Engagingly written and free of jargon, a tight first monograph that. . . . Is not another (tired) story of nationalism’s failure in Peru. It is an important book about the hazards of stratified success.”--Hispanic American Historical Review