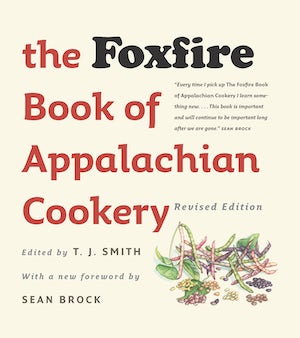 From springhouse to smokehouse, from hearth to garden, Southern Appalachian foodways are celebrated afresh in this newly revised edition of The Foxfire Book of Appalachian Cookery. First published in 1984—one of the wildly popular Foxfire books drawn from a wealth of material gathered by Foxfire students in Rabun Gap, Georgia—the volume combines hundreds of unpretentious, delectable recipes with the practical knowledge, wisdom, and riveting stories of those who have cooked this way for generations. A tremendous resource for all interested in the region’s culinary culture, it is now reimagined with today’s heightened interest in cultural-specific cooking and food-lovers culture in mind. This edition features new documentation, photographs, and recipes drawn from Foxfire’s extensive archives while maintaining all the reminiscences and sharp humor of the amazing people originally interviewed.

Appalachian-born chef Sean Brock contributes a passionate foreword to this edition, witnessing to the book’s spellbinding influence on him and its continued relevance. T. J. Smith, editor of the revised edition, provides a fascinating perspective on the book’s original creation and this revision. They invite you to join Foxfire for the first time or once again for a journey into the delicious world of wild foods, traditional favorites, and tastes found only in Southern Appalachia.

T.J. Smith, executive director of The Foxfire Fund, Inc., holds a Ph.D. in folklore from the University of Louisiana–Lafayette.
For more information about T. J. Smith, visit the Author Page.

Sean Brock, founder of Husk restaurant in Charleston, will be opening a new restaurant dedicated to Appalachian cooking—Audrey, in Nashville. He is featured in Chef’s Table on Netflix.
For more information about Sean Brock, visit the Author Page.

“If you’re wondering what came before the Noma Guide to Fermentation. . . . Open-hearth cooking. Zero-waste preservation. Nose-to-tail butchery. There are any number of new guides to these hot topics from pedigreed, of-the-moment chefs—but before you buy those, you should read this year’s beautiful reissue of the 1982 cult classic The Foxfire Book of Appalachian Cooking. Put together by a small-but-mighty non-profit dedicated to preserving traditional Appalachian foodways, its recipes, essays, and black-and-white photos serve as a humbling reminder that before certain techniques were buzzwords, they were a means of survival for resourceful people in rural America—and, indeed, all over the world.”—Bon Appétit

“People who have been following the back-to-the-land food trends that have resurfaced in the past decade might find some of the recipes in [The Foxfire Book of Appalachian Cookery] familiar and focused around a simple, self-sufficient way of life. There are instructions for making bread in a Dutch oven (specifically over coals in the fireplace.) For pork, the authors note that Appalachians ‘stand by their belief that virtually no part of the hog should be thrown away,’ and its recipes for homemade scrapple, hog's head, jowl or sausage wouldn't be out of place on a certain kind of Brooklyn menu. . . . Although foraging and using imperfect vegetables and local food are popular concepts today, they've been a way of life for generations in many cultures. Making charcuterie in-house has become a selling point for restaurants; Foxfire was one of the few books to describe how to make sausage from scratch.”—The Salt, NPR Books

“If you’re interested in real American cooking (not the media-hyped trend), spend time with the people in this wonderful book.”--Cuisine

“The book’s essays, interviews, and techniques draw out things you don’t realize about cooking until you do it. For example, it’s easy to imagine that hearth cooking is heavy work, but you might not realize that it is also intentional and meditative; it takes hours to produce the hot bed of coals that supply sustained heat. The book digs into root cellars and spring houses, not as abstract bits of history but functioning food technologies.”--CHoW Line 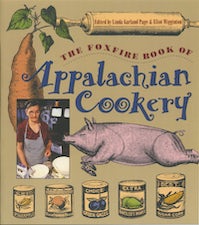