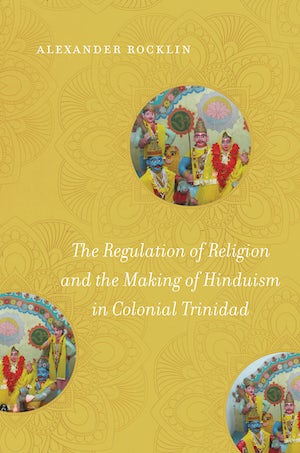 To purchase online via an independent bookstore, visit Bookshop.org
How can religious freedom be granted to people who do not have a religion? While Indian indentured workers in colonial Trinidad practiced cherished rituals, “Hinduism” was not a widespread category in India at the time. On this Caribbean island, people of South Asian descent and African descent came together—under the watchful eyes of the British rulers—to walk on hot coals for fierce goddesses, summon spirits of the dead, or honor Muslim martyrs, practices that challenged colonial norms for religion and race. Drawing deeply on colonial archives, Alexander Rocklin examines the role of the category of religion in the regulation of the lives of Indian laborers struggling for autonomy.

Gradually, Indians learned to narrate the origins, similarities, and differences among their fellows’ cosmological views, and to define Hindus, Muslims, and Christians as distinct groups. Their goal in doing this work of subaltern comparative religion, as Rocklin puts it, was to avoid criminalization and to have their rituals authorized as legitimate religion—they wanted nothing less than to gain access to the British promise of religious freedom. With the indenture system’s end, the culmination of this politics of recognition was the gradual transformation of Hindus’ rituals and the reorganization of their lives—they fabricated a “world religion” called Hinduism.

“As an intriguing and erudite case study, The Regulation of Religion constitutes a welcome addition to the literature, not only for Caribbean history, but also for studies of ritual, colonialism, diaspora, and Hindu traditions in general.”--Reading Religion

“Debates about the definition of religion have always structured the study of religion. . . . Moreover, scholars who examine these questions empirically typically leave the Caribbean out of the equation; those who do address the Caribbean leave out the Hindu community. Rocklin’s book makes a tremendous contribution in all three areas, demonstrating clearly why definitions of religion matter practically and politically, why they matter in the Caribbean, and, particularly, why they mattered to Indians constructing Hinduism in Trinidad and around the world. . . . An excellent book, meticulously researched and detailed.”--Nova Religio

“Deeply researched and richly theorized…Rocklin’s exciting and insightful work will appeal to scholars across a range of areas and subfields and deserves to be widely read.” – Religious Studies Review

“Rocklin's focus on the Caribbean is an important case study, as the Caribbean is often left out of these discussions despite its interesting and complex history.” – Journal of Law and Religion

“With this pioneering interpretive work, Rocklin makes a major contribution to Caribbean history as well as to Hindu diaspora studies. Exploring and explicating a welter of primary materials unfamiliar to most, this splendid, compelling study reveals the complex and dynamic circumstances in which Indians in the southern Caribbean navigated their colonial world and operated as social actors and influential interlocutors within multiracial and multireligious webs of state-driven interpellation.”—Keith McNeal, University of Houston

“Crossing the boundaries of history and anthropology, Rocklin’s deeply researched argument for a counterpoint between subaltern and colonial comparative religion will be essential for those interested in the development of Hinduism on a world scale, comparative religion, and Caribbean history and anthropology, where it will complement recent work on African-oriented Caribbean religion.”—Diana Paton, University of Edinburgh