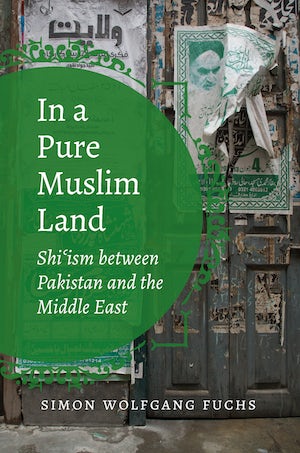 Centering Pakistan in a story of transnational Islam stretching from South Asia to the Middle East, Simon Wolfgang Fuchs offers the first in-depth ethnographic history of the intellectual production of Shi'is and their religious competitors in this “Land of the Pure." The notion of Pakistan as the pinnacle of modern global Muslim aspiration forms a crucial component of this story. It has empowered Shi'is, who form about twenty percent of the country's population, to advance alternative conceptions of their religious hierarchy while claiming the support of towering grand ayatollahs in Iran and Iraq.

Fuchs shows how popular Pakistani preachers and scholars have boldly tapped into the esoteric potential of Shi'ism, occupying a creative and at times disruptive role as brokers, translators, and self-confident pioneers of contemporary Islamic thought. They have indigenized the Iranian Revolution and formulated their own ideas for fulfilling the original promise of Pakistan. Challenging typical views of Pakistan as a mere Shi'i backwater, Fuchs argues that its complex religious landscape represents how a local, South Asian Islam may open up space for new intellectual contributions to global Islam. Yet religious ideology has also turned Pakistan into a deadly battlefield: sectarian groups since the 1980s have been bent on excluding Shi'is as harmful to their own vision of an exemplary Islamic state.

"Challenges common assumptions about Shi'i Muslims, focusing less on Iran and more on Pakistan. . . . Those who wade into the depth of Fuchs's impeccable scholarship will find a nuanced picture of the debate in Pakistan about the ideal Muslim state in the modern world."--Publishers Weekly

“This stimulating and vibrant study of Shi'i Islam in Pakistan will appeal to a wide range of readers interested in Islam and its diverse and international history.” --CHOICE

“As for Simon Wolfgang Fuchs’s In a Pure Muslim Land, its lucid prose and thought-provoking analytical engagement with transnational Islam makes it highly recommendable to those interested in the journey of religious ideas between the Middle East and South Asia.”--Middle East Journal

“In a Pure Muslim Land makes a major contribution to the study of Pakistani Shi'ism. . . . This book adds to a growing body of scholarship on different trajectories of Pakistani Shi'ism . . . contributing a much-needed perspective of post-Partition Shi'ism in which 'ulama are complex individuals whose stances on tradition, authority, and the Subcontinent’s relationship to Iran and Iraq are worthy of our attention and understanding.”--Bloomsbury Pakistan

“This excellent account of the development of Shi’i thought in Pakistan, written in lucid language. . . . Makes a major contribution to the study of Islam in South Asia and will prove highly instructive to anyone interested in Islamic thought, religious authority, and the transnational history of ideas.”--The Book Review

“In a Pure Muslim Land is a ground-breaking addition to the growing field of Shi’i studies. By centering Pakistan in the story of Shi’i Islam, Simon Wolfgang Fuchs’ work broadens a dialogue that is typically restricted to the Middle East. . . . Fuchs highlights transnational relationships and religious concepts that travel across borders and are thereby transformed in the process.”--South Asia: Journal of South Asian Studies