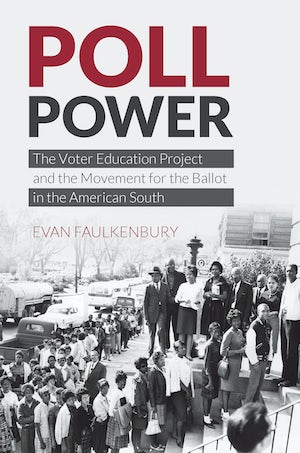 The civil rights movement required money. In the early 1960s, after years of grassroots organizing, civil rights activists convinced nonprofit foundations to donate in support of voter education and registration efforts. One result was the Voter Education Project (VEP), which, starting in 1962, showed far-reaching results almost immediately and organized the groundwork that eventually led to the Voting Rights Act of 1965. In African American communities across the South, the VEP catalyzed existing campaigns; it paid for fuel, booked rallies, bought food for volunteers, and paid people to canvass neighborhoods. Despite this progress, powerful conservatives in Congress weaponized the federal tax code to undercut the important work of the VEP.

Though local power had long existed in the hundreds of southern towns and cities that saw organized civil rights action, the VEP was vital to converting that power into political motion. Evan Faulkenbury offers a much-needed explanation of how philanthropic foundations, outside funding, and tax policy shaped the southern black freedom movement.

"Successfully captures how the civil rights movement evolved from one of demonstrations to one that influenced and registered voters. . . . Faulkenbury excels at showing how interactions among organizations in the North helped fund activists in the South, and how the Tax Reform Act of 1969 undermined further progress and ultimately led to the end of the VEP."--Library Journal, starred review

“Faulkenbury’s groundbreaking work Poll Power examines the Voter Education Project (VEP). . . . [and] gives the reader insight into a lesser-known yet essential story of the civil rights movement. . . . Well-written and brief. . . . Poll Power is a necessary source for anyone wishing to know more about the inner-workings and financial underpinnings of voter registration efforts in the South.”--Arkansas Historical Quarterly

“Faulkenbury mines a wealth of archival sources, including a broad array of oral histories conducted with key players in voter registration efforts. He offers a concise, readable narrative that reminds us that successful social movements require both daring activists on the front lines and dedicated donors who can sustain the effort behind the scenes.”--North Carolina Historical Review

“With a focus on the southern regional efforts of the VEP, Faulkenbury employs a rich array of sources to offer a new perspective of the organization missing from accounts of the civil rights movement. . . . He deftly manages the exigencies of organizational and people’s history. . . . Weaving together the varied voices of leaders, officials, and grassroots activists.”--Journal of North Carolina Association of Historians

“Faulkenbury has written the long-overdue definitive history of the VEP.”--Journal of American History

"In this innovative study, Faulkenbury goes behind the scenes to elucidate the relationship between the civil rights movement and philanthropic foundations. An organizational history of the Voter Education Project and its funders, Poll Power demonstrates that as civil rights activists in countless communities across the South began to institutionalize their hard-won access to the ballot, their opponents answered with federal legislation that severely curtailed the chances of their success. This work is essential for understanding the intricacies of voter suppression efforts, both past and present."--Katherine Mellen Charron, North Carolina State University