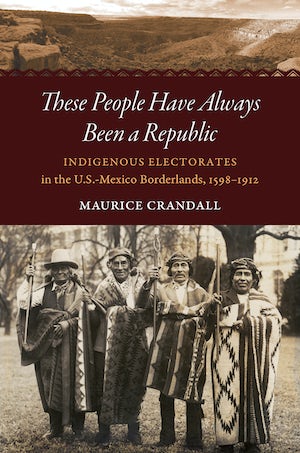 Spanning three hundred years and the colonial regimes of Spain, Mexico, and the United States, Maurice S. Crandall’s sweeping history of Native American political rights in what is now New Mexico, Arizona, and Sonora demonstrates how Indigenous communities implemented, subverted, rejected, and indigenized colonial ideologies of democracy, both to accommodate and to oppose colonial power.

Focusing on four groups--Pueblos in New Mexico, Hopis in northern Arizona, and Tohono O'odhams and Yaquis in Arizona/Sonora--Crandall reveals the ways Indigenous peoples absorbed and adapted colonially imposed forms of politics to exercise sovereignty based on localized political, economic, and social needs. Using sources that include oral histories and multinational archives, this book allows us to compare Spanish, Mexican, and American conceptions of Indian citizenship, and adds to our understanding of the centuries-long struggle of Indigenous groups to assert their sovereignty in the face of settler colonial rule.

“A sweeping and imaginative work spanning four centuries. . . . Crandall not only sheds light on the past and enduring nature of Indigenous republics, consensus democracy, and community-based political authority but argues that these structures can perhaps serve as effective templates to stave off the climate of political cynicism and paralysis shaking democracies throughout the Americas today.”--Hispanic American Historical Review

“Focusing on four major Native American groups—Pueblos, Hopis, Yaquis, and Tohono O’odham—in New Mexico and Arizona/Sonora, Crandall . . . examines the ways in which indigenous peoples historically interacted with colonial politics in the American Southwest. . . . A welcome addition to borderlands history and the study of indigenous groups under colonization.”--CHOICE

"A vital contribution. . . . In an account both sweeping and granular, Crandall succeeds in offering a nuanced account of power in the borderlands, one that challenges scholars and students alike to reconsider the deeper, tangled roots of postcolonial Native polities that simple narratives of 'progress' too often gloss over. . . . This book fiercely reminds us that the contingency of Native civil rights, and how they are exercised and denied across the continent, is ongoing."--The Journal of the Gilded Age and Progressive Era

"An exceptional new work of Indigenous political history. . . . Balancing geographic and temporal breadth with a detailed reading of the changing structures of governance for Indigenous electorates, Crandall offers what is sure to become a foundational work in the historiography of border studies and Native political history."--Journal of American Ethnic History