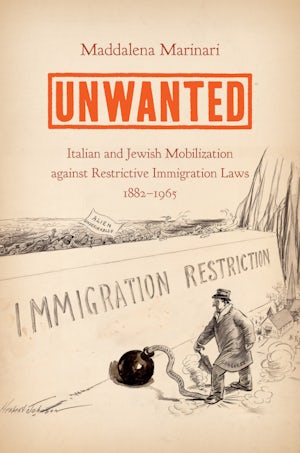 In the late nineteenth century, Italians and Eastern European Jews joined millions of migrants around the globe who left their countries to take advantage of the demand for unskilled labor in rapidly industrializing nations, including the United States. Many Americans of northern and western European ancestry regarded these newcomers as biologically and culturally inferior--unassimilable--and by 1924, the United States had instituted national origins quotas to curtail immigration from southern and eastern Europe. Weaving together political, social, and transnational history, Maddalena Marinari examines how, from 1882 to 1965, Italian and Jewish reformers profoundly influenced the country’s immigration policy as they mobilized against the immigration laws that marked them as undesirable.

Strategic alliances among restrictionist legislators in Congress, a climate of anti-immigrant hysteria, and a fickle executive branch often left these immigrants with few options except to negotiate and accept political compromises. As they tested the limits of citizenship and citizen activism, however, the actors at the heart of Marinari’s story shaped the terms of debate around immigration in the United States in ways we still reckon with today.

Maddalena Marinari is associate professor of history at Gustavus Adolphus College and coeditor of A Nation of Immigrants Reconsidered: U.S. Society in An Age of Restriction, 1924–1965.
For more information about Maddalena Marinari, visit the Author Page.

“This timely study retraces the fraught political history of American immigration policy with emphasis on the work of Italian and Jewish pro-immigration lobbyists who challenged congressional restrictionists. Marinari . . . emphasizes debates among pro-immigration activists concerning strategy, race, and whether to compromise on principles. . . . A well-researched, richly detailed book that provides valuable background concerning the immigration issues of the present.”--CHOICE

"Marinari has taken on an immensely complex topic, and successfully reconstructed the ways in which the efforts of Italian and Jewish anti-restriction activists contributed to a range of legislative, congressional, and piecemeal immigration reforms. Her book demonstrates that immigrants were not passive in the face of racist restrictions, but created coalitions and engaged in grassroots activities to pressure Congress for more equitable laws based on the principle of family reunification."--Jewish Historical Studies

"This impressive book is noteworthy for its breadth of coverage alone, but there is certainly much more that renders it commendable. . . . The book's greatest strength, by far, is Marinari's ability to see the inner workings of the legislative process. . . . Unwanted is one of the most comprehensive accounts of immigration policy construction ever written."--Italian American Review

"A nuanced study that peels back the multiple layers of history surrounding midcentury immigration reform. . . . Marinari offers an accessible historical account of immigration politics that will aid any student of this period or observer of the current political climate."--American Catholic Studies

"By following the story of Italian and Jewish immigration reform advocates’ struggles, Unwanted provides a meditation on the slow, messy nature of the legislative process and the Sisyphean nature of pushing for legislative change. This is not a history of revolutionary upheavals; rather, it is a tale about incremental shifts in policy, and the perpetually cat-herding nature of coalitional work. . . . The central lesson here—that organizing to effect legislative change is a murky, long-term project—is valuable for historians as well as all readers who care about shaping immigration policy."--Journal of Social History

“Weaving together political, social, and transnational history, Marinari examines how, from 1882 to 1965, Italian and Jewish reformers mobilized against US immigration laws that marked them as biologically and culturally inferior, unassimilable, and undesirable. She ﬁnds that strategic alliances among restrictionist legislators in Congress, a climate of anti-immigrant hysteria, and a ﬁckle executive branch thwarted their efforts but that as they tested the limits of citizenship and citizen activism, they shaped the terms of debate around immigration in ways still relevant today.”--Law & Social Inquiry