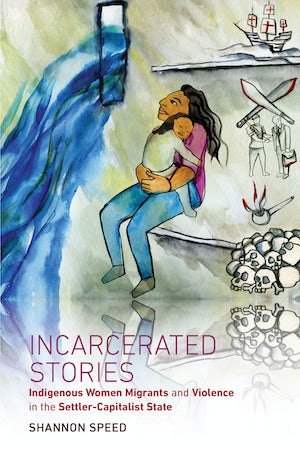 Indigenous women migrants from Central America and Mexico face harrowing experiences of violence before, during, and after their migration to the United States, like all asylum seekers. But as Shannon Speed argues, the circumstances for Indigenous women are especially devastating, given their disproportionate vulnerability to neoliberal economic and political policies and practices in Latin America and the United States, including policing, detention, and human trafficking. Speed dubs this vulnerability "neoliberal multicriminalism" and identifies its relation to settler structures of Indigenous dispossession and elimination. Using innovative ethnographic practices to record and recount stories from Indigenous women in U.S. detention, Speed demonstrates that these women's vulnerability to individual and state violence is not rooted in a failure to exercise agency. Rather, it is a structural condition, created and reinforced by settler colonialism, which consistently deploys racial and gender ideologies to manage the ongoing business of occupation and capitalist exploitation.

With sensitive narration and sophisticated analysis, this book reveals the human consequences of state policy and practices throughout the Americas and adds vital new context for understanding the circumstances of migrants seeking asylum in the United States.

Shannon Speed (Chickasaw Nation) is professor of gender studies and anthropology and director of the American Indian Studies Center at the University of California, Los Angeles.
For more information about Shannon Speed, visit the Author Page.

“Presents in unflinching fashion the lived experiences of Indigenous women migrants seeking asylum. . . . Speed puts in the work to create a context for the reader in such a way that the uninitiated will have little trouble placing these stories into the existing conversation surrounding violence against Indigenous women.”--Transmotion

“This bold, provocative, and very timely book . . . focuses on the experiences of indigenous women from Honduras, Guatemala, and southern Mexico who annually undertake the long, dangerous trek to the US border and beyond, fleeing poverty, violence, and repression. . . . Speed uses the stories she gathered to construct a broader and more intriguing argument about the structures of violence in which the boundaries between state and criminal are blurred. . . . An excellent entrée into any thoughtful study of the contemporary mess of US immigration policy and the experience of Central American immigrants to this country.”--CHOICE

"Through rich, engaged ethnographic research conducted through visitation of Indigenous migrant women at the T. Don Hutto Immigration detention facility in Texas, Speed gathered stories of migrants from Mexico, Guatemala, and Honduras who had made the journey to the United States. These 'incarcerated' stories form the basis of her succinct and theoretically sophisticated analysis exploring the violence resulting from enduring settler colonial state power and the embrace of neoliberal capitalism."--International Migration Review

"Speed offers us a rare glimpse of deportation proceedings and dangerous border crossings from Indigenous women's perspectives. By focusing on the structural violence inherent in immigration policies and capitalist economies, she demonstrates how ideologies of class, race, gender, and nationality converge in devastating ways to mark Indigenous women's lives at different junctures of the immigrant experience."--Bianet Castellanos, University of Minnesota

"Incarcerated Stories is a tremendously powerful and engaging exploration of the particular ways in which Indigenous women are made vulnerable by the structural violence of settler states."--María Elena García, University of Washington