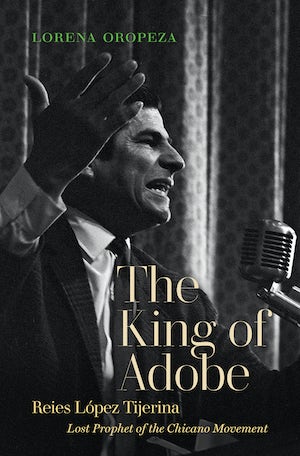 In 1967, Reies López Tijerina led an armed takeover of a New Mexico courthouse in the name of land rights for disenfranchised Spanish-speaking locals. The small-scale raid surprisingly thrust Tijerina and his cause into the national spotlight, catalyzing an entire generation of activists. The actions of Tijerina and his group, the Alianza Federal de Mercedes (the Federal Alliance of Land Grants), demanded that Americans attend to an overlooked part of the country’s history: the United States was an aggressive empire that had conquered and colonized the Southwest and subsequently wrenched land away from border people—Mexicans and Native Americans alike. To many young Mexican American activists at the time, Tijerina and the Alianza offered a compelling and militant alternative to the nonviolence of Cesar Chavez and Martin Luther King Jr. Tijerina's place at the table among the nation’s leading civil rights activists was short-lived, but his analysis of land dispossession and his prophetic zeal for the rights of his people was essential to the creation of the Chicano movement.

This fascinating full biography of Tijerina (1926–2015) offers a fresh and unvarnished look at one of the most controversial, criticized, and misunderstood activists of the civil rights era. Basing her work on painstaking archival research and new interviews with key participants in Tijerina’s life and career, Lorena Oropeza traces the origins of Tijerina's revelatory historical analysis to the years he spent as a Pentecostal preacher and his hidden past as a self-proclaimed prophet of God. Confronting allegations of anti-Semitism and accusations of sexual abuse, as well as evidence of extreme religiosity and possible mental illness, Oropeza's narrative captures the life of a man--alternately mesmerizing and repellant--who changed our understanding of the American West and the place of Latinos in the fabric of American struggles for equality and self-determination.

Lorena Oropeza is professor of history at the University of California, Davis, and author of ¡Raza Sí! ¡Guerra No! Chicano Protest and Patriotism during the Viet Nam War Era.
For more information about Lorena Oropeza, visit the Author Page.

"A timely biography written with conscientious depth and detail, covering the full extent of [Tijerina's] life with an objective clarity. A great read for anyone interested in New Mexican history or civil rights."--Taos News

“Oropeza’s work is meticulous in detail, incisive in analysis, and provides another facet of the rich history of Mexican people on the American side of the border. . . . This welcome biography significantly contributes to our understanding of the Chicano movement and of the Mexican American struggle for liberation.”--Southwestern Historical Quarterly

"A long-overdue and much-needed biography. Oropeza captures the complexities of a man central to the Chicano movement and Chicano history."--Matt Garcia, author of From the Jaws of Victory: The Triumph and Tragedy of Cesar Chavez and the Farm Worker Movement

"A deeply compelling biography of a consequential figure in modern U.S. history. Oropeza reveals Tijerina not only as a protest leader and organizer but also as a tragically flawed human being and an intellectual whose ideas about settler colonialism are today in wide circulation. Mandatory reading for anybody who wants to understand the history of race in America or the West after World War II."--Benjamin H. Johnson, author of Escaping the Dark, Gray City: Fear and Hope in Progressive-Era Conservation

"While the 'Great Man' theory of history was a nineteenth-century phenomenon, its remnants linger today. We still sanctify certain historic figures; our sin is being unable to blend the saint and the sinner into their complete personhood. We, our children, and the discipline of history are the poorer for it. Lorena Oropeza mined an enormous amount of primary and secondary material to give context to Reies López Tijerina's contributions to Chicano history and the price paid by those who traveled his path with him. When teaching the history of the Chicano movement, it is important to me that my students emerge with an empathetic relationship to the collective Tijerina: the man, his family, his followers, and those who schooled him. The King of Adobe is a major step in that direction."--Maria Varela