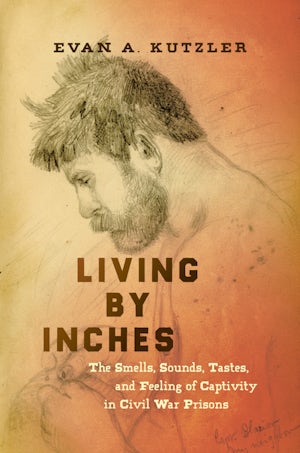 From battlefields, boxcars, and forgotten warehouses to notorious prison camps like Andersonville and Elmira, prisoners seemed to be everywhere during the American Civil War. Yet there is much we do not know about the soldiers and civilians whose very lives were in the hands of their enemies. Living by Inches is the first book to examine how imprisoned men in the Civil War perceived captivity through the basic building blocks of human experience--their five senses. From the first whiffs of a prison warehouse to the taste of cornbread and the feeling of lice, captivity assaulted prisoners’ perceptions of their environments and themselves. Evan A. Kutzler demonstrates that the sensory experience of imprisonment produced an inner struggle for men who sought to preserve their bodies, their minds, and their sense of self as distinct from the fundamentally uncivilized and filthy environments surrounding them. From the mundane to the horrific, these men survived the daily experiences of captivity by adjusting to their circumstances, even if these transformations worried prisoners about what type of men they were becoming.

Evan A. Kutzler is assistant professor of history at Georgia Southwestern State University.
For more information about Evan A. Kutzler, visit the Author Page.

"[Civil War] soldiers wrote voluminously about what they smelled, heard, tasted, and felt. Kutzler has read deeply and empathetically into their letters, diaries, and memoirs to bring to light how imprisoned men perceived their environment through the basic human senses."--America's Civil War

“Dozens of books are published every year on the American Civil War; sometimes it seems as if every topic possible has been covered. Kutzler, however, offers a unique take on the conflict with his sensory history of the war as seen, heard, smelled, tasted, and felt by prisoners of war.”--Missouri Historical Review

“Kutzler has performed exhaustive research to put together his contribution to the relatively new field of the history of senses. . . . As part of a broader series on Civil War America put out by UNC Press, this work undoubtedly plays an irreplaceable role.”--The Annals of Iowa

“An empathetic analysis of life, and death, in prisoner-of-war camps. . . . Kutzler’s analysis of the sensory experience of imprisonment has enhanced our understanding of life for those soldiers and civilians (Kutzler does include a few civilians in his narrative) unfortunate enough to have spent time in military conﬁnement during the Civil War.”--H-Net Reviews

“Living by Inches offers historians and other scholars of the Civil War-era useful insight into the sensory revolution life in captivity often entailed while also remaining attentive to the importance of “time, place, and culture” in the processing of those senses.” – New England Quarterly

“Kutzler has composed a narrative that incorporates all the senses and offers a vivid exploration of the harrowing experience of prisoners during the American Civil War…an innovative and concise survey of individual experiences in Civil War prison camps.” – Arkansas Historical Quarterly