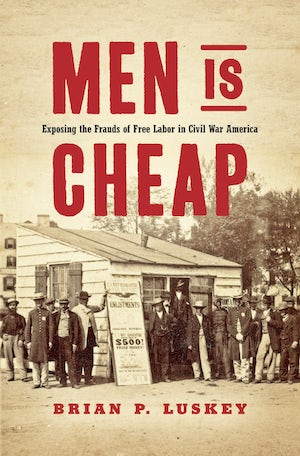 When a Civil War substitute broker told business associates that "Men is cheep here to Day," he exposed an unsettling contradiction at the heart of the Union's war effort. Despite Northerners' devotion to the principles of free labor, the war produced rampant speculation and coercive labor arrangements that many Americans labeled fraudulent. Debates about this contradiction focused on employment agencies called "intelligence offices," institutions of dubious character that nevertheless served the military and domestic necessities of the Union army and Northern households. Northerners condemned labor agents for pocketing fees above and beyond contracts for wages between employers and employees. Yet the transactions these middlemen brokered with vulnerable Irish immigrants, Union soldiers and veterans, former slaves, and Confederate deserters defined the limits of independence in the wage labor economy and clarified who could prosper in it.

Men Is Cheap shows that in the process of winning the war, Northerners were forced to grapple with the frauds of free labor. Labor brokers, by helping to staff the Union military and Yankee households, did indispensable work that helped the Northern state and Northern employers emerge victorious. They also gave rise to an economic and political system that enriched the managerial class at the expense of laborers--a reality that resonates to this day.

Brian P. Luskey is associate professor of history at West Virginia University and author of On the Make: Clerks and the Quest for Capital in Nineteenth-Century America.
For more information about Brian P. Luskey, visit the Author Page.

“Luskey offers a genuinely original take on the Civil War era, a combination of cultural, economic, social, and labor history. . . . The cast of characters is wide, including speculators, soldiers, enslaved and emancipated black people, and headstrong Irish domestic servants. Brokers, Luskey concludes, helped the Union achieve victory in war, but as agents of capitalism, they profited at the expense of those who did the actual work and fighting, a story that seems familiar enough in our own time.”--North Carolina Historical Review

"Brian P. Luskey has written a highly original and extremely compelling account of how the Civil War, a war fought for freedom, ultimately undermined and narrowed what freedom meant in the United States. A beautifully crafted, closely argued work."--Rosanne Currarino, author of The Labor Question in America: Economic Democracy in the Gilded Age

“A masterful work of historical research. Centering his story on a wide-ranging cast of brokers, speculators, merchants, soldiers, and formerly enslaved people, Brian Luskey examines deep flaws in the system of free labor at the very moment when it was supposed to deliver the nation from the oppression of chattel bondage. Luskey leaves no doubt that the Civil War marked a critical shift in the history of American labor and capitalism. Men Is Cheap is an eye-opening and absorbing read.”—Amy Murrell Taylor, author of Embattled Freedom: Journeys through the Civil War’s Slave Refugee Camps